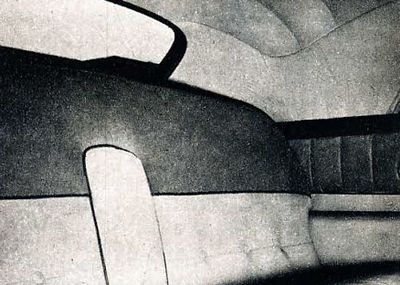 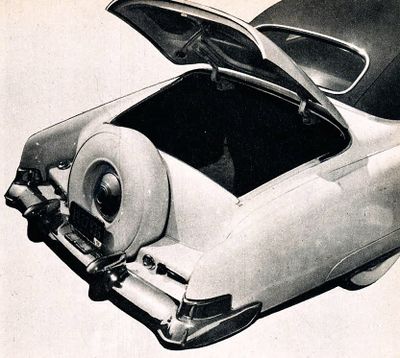 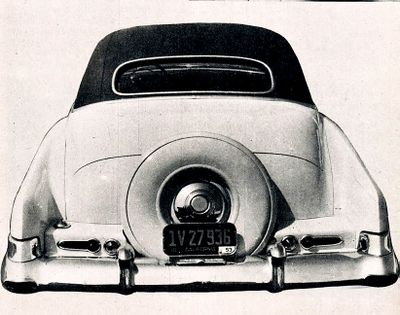 1952 Cadillac series 62 Coupe restyled by Maurice Schwartz of Bohman & Schwartz in Pasadena for Milton Melton of Beverly Hills, California. Milton wanted several things done to his car, such as limousine semi-privacy in the rear seat, a continental tire that did not look as if it had been bolted on as afterthought, and a deck lid that would open without tilting the tire.[1]

The first thing Maurice did, was to fit the car with a rear window from a later limousine model series 75 Cadillac. The rear quarter windows were filled in with sheet metal, and the new frames were built and windows cut to fit. The top was then padded and covered in woven nylon. Schwartz also reupholstered the remaining inside the car which had previously been window space. It was done in original headliner material, spliced in and matching well enough for a factory job.[1]

Bodywork included removal of the tail fins and taillights. The rear fenders were also extended 8 inches, and Buick taillights were added, in addition to backup lights and a gas filler cap on a hand-formed gravel shield. Maurice built a hardwood form for the gravel pan, the form was then sent to a Los Angeles metal shop where power hammers forced the sheet metal around the pattern. The next task was to tackle the deck lid. Milton wanted it to be possible to open without moving the tire. Maurice cut the deck lid in half, and the lower section was welded into place and the seams were filled. The upper half became the operating lid, and was counterbalanced with springs so it would open automatically when the mechanically lever below the bumper was touched. The hood was de-chromed, and the car was thereby painted in a soft pearl gray color.[1]

Please get in touch with us at mail@kustomrama.com if you have additional information or photos to share about Milton Melton's 1952 Cadillac.