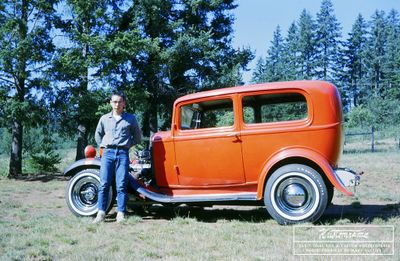 A photo of Marv with his tudor sedan taken in the Summer of 1963. "It had a 265 Chevy motor with a 39 Ford transmission, dropped axle, tuck and roll interior, SW gauges, a rake - all the good stuff back in the early 60s." It ran on Royal Master tires, as Marv recalls, the tire to have back then. Photo courtesy of Marv Shetler.

1932 Ford Tudor Sedan owned by Marv Shetler of Scott Mills, Oregon. Marv has been interested in hot rods since he was 15 or 16 years old, and he bought his first car when he was 16 or 17 years old, "a completely stock and original 28 Ford Model A pickup which I managed to pretty well destroy as I sought to make into a hot rod," Marv told Sondre Kvipt of Kustomrama in 2020. "My second car was a 1932 Ford two-door sedan which I purchased when I was 18. It had a 265 Chevy motor with a 39 Ford transmission, dropped axle, tuck and roll interior, SW gauges, a rake - all the good stuff back in the early 60s." Marv bought the car in Kansas in the fall of 1962. He was in college in Kansas, but lived in Oregon, and he drove the car from Kansas to Oregon at the end of the school year in 1963.[1]

Please get in touch with us at mail@kustomrama.com if you have additional information or photos to share about Marv Shetler's 1932 Ford.