Sal and Louie's roadster as it appeared when it was featured in Hot Rod Magazine July 1950. Sal and Louis are proudly posing in the roadster. Photo by Tom Medley. 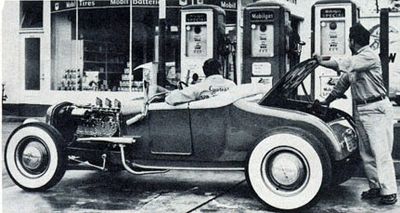 Sal demonstrating the proper method of filling the twelve-gallon gas tank mounted in the rear compartment. Photo by Tom Medley. 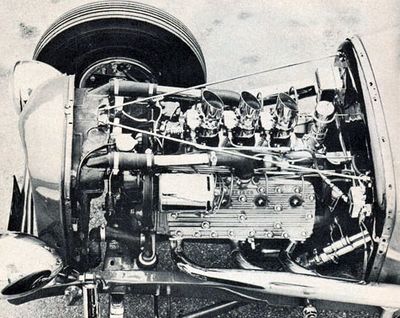 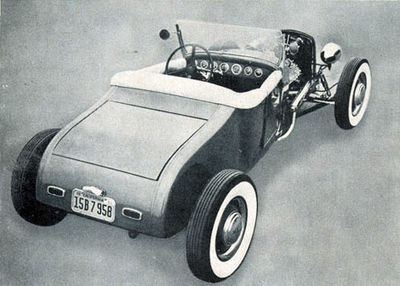 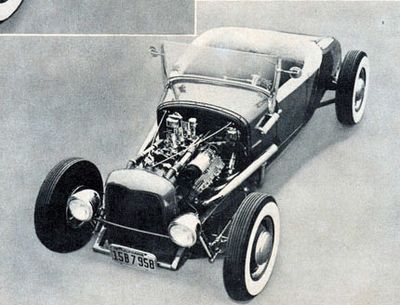 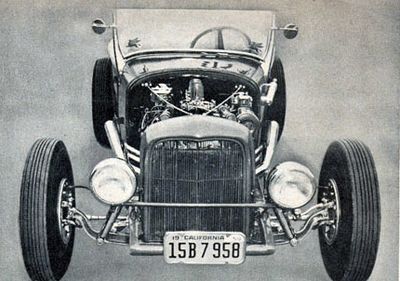 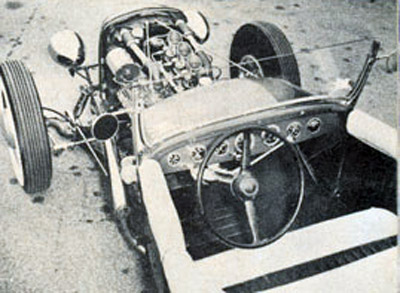 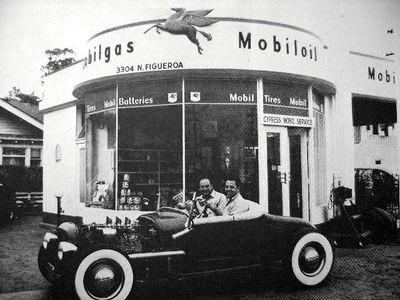 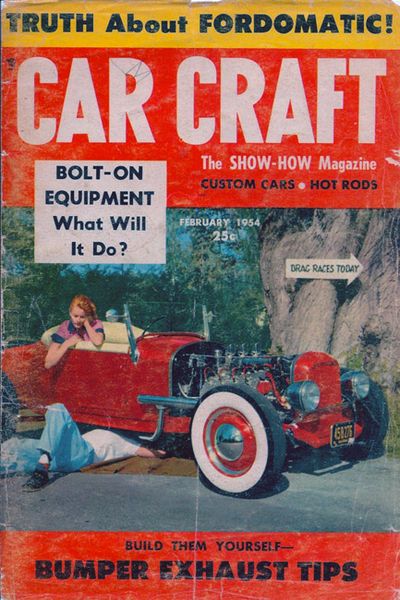 In 1954 the roadster was featured on the cpver of Car Craft February 1954. By then it was owned by Don Chapman.

Don Chapman with the roadster. Photo by Felix Zelenka. 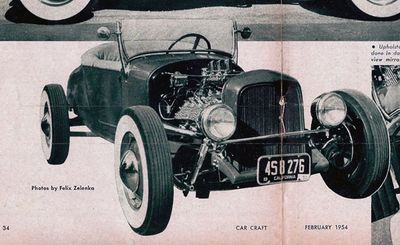 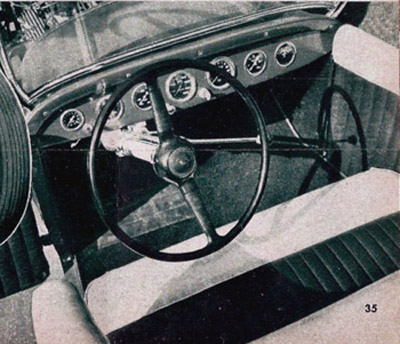 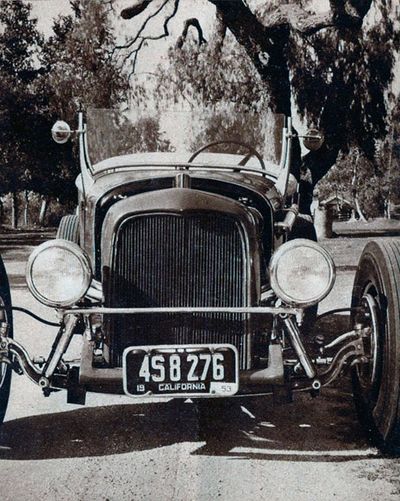 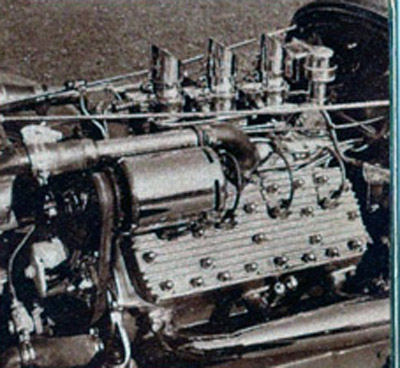 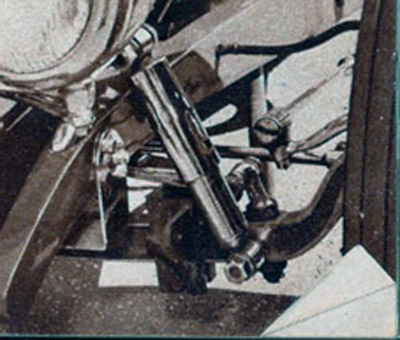 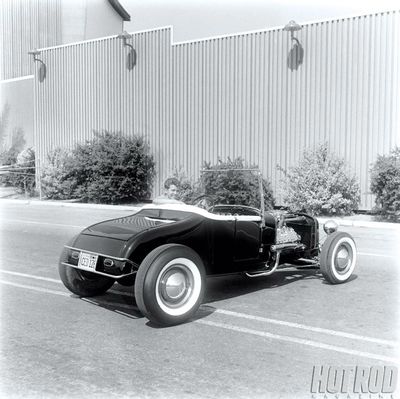 The roadster as it appeared August 14, 1957. By then it was owned by Road Kings member and actor Skip Torgerson. Photo by Erick Rickman, courtesy of Hot Rod Magazine. 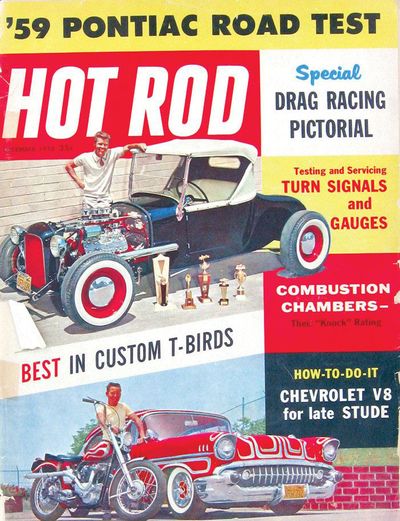 Skip's roadster on the cover of Hot Rod Magazine December 1958. 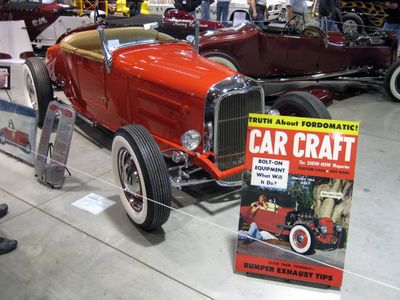 A restored version of the roadster at the 2011 Grand National Roadster Show. This version, featuring a chromed grille shell, was still owned by Tony Baron. Photo by Brian Bass, from The HAMB. 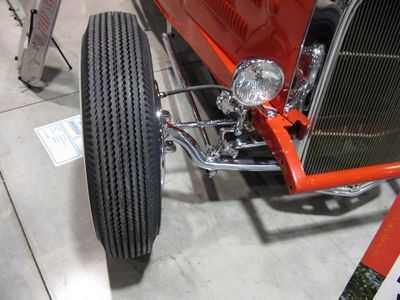 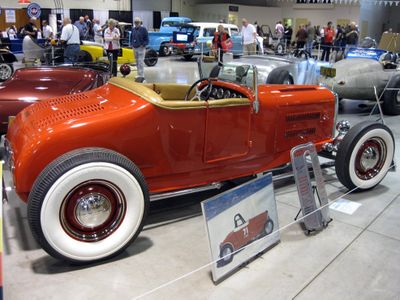 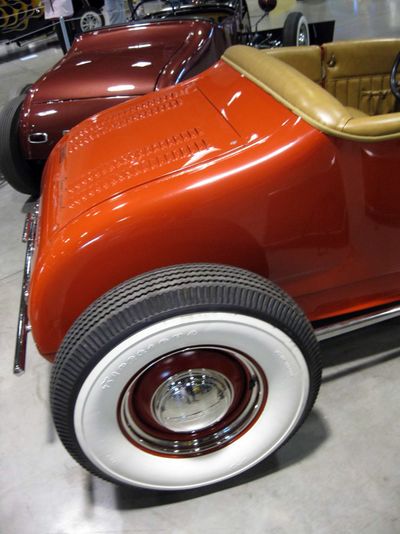 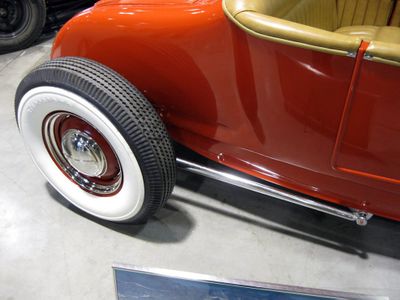 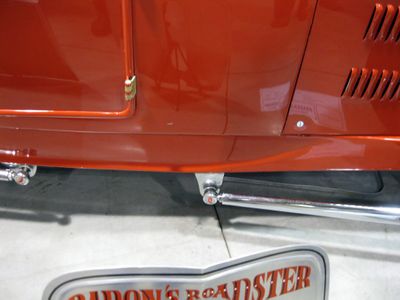 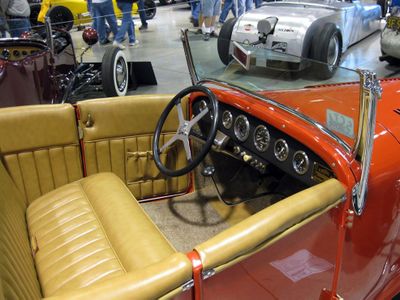 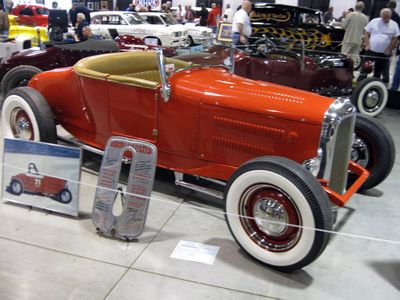 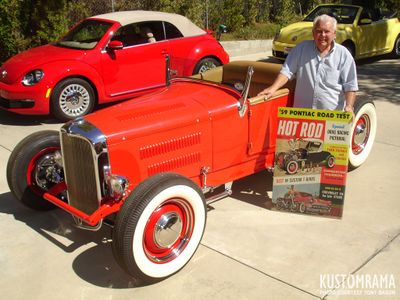 1927 Ford Model T Roadster owned and built by Sal Macchia and Louis Banto of Los Angeles, California. Sal and Louis ran a Los Angeles Mobile Service Station at 3304 N. Figueroa. They were both found of roadsters, so they decided to build one in their spare time. They started the build with a 1927 Ford Model T roadster body and an old 1932 Ford frame. The body was channeled 3 inches over the frame. In order to drop the small body over the frame, they had to narrow the frame. The frame was narrowed by shortening the rear crossmember. The original center crossmember was replaced by two special crossmembers which they fabricated out of angle iron. These took care of the necessary means of supporting the back of the engine, reinforcing the frame, mounting the brake master cylinder and securing the front wishbone ball-joint. The front frame horns were boxed and smoothed, with the forward crosstube welded in place. All of the holes in the frame rails were welded in and the surface was ground smooth. The rest of the work on the car followed the same meticulous pattern. The body was smoothed and refinished and all parts of the chassis were either painted or chromed. The cowl vent was removed, and the space filled in smooth. In the rear, the turtle deck had been faired into the body. The original insets for the back wheels were filled in with sheet metal and smoothed. 1941 Chevrolet tail and stop lights were set into the back of the turtle together with a license light and bracket combo. The stock windshield frame and brackets were chromed. The top of the brackets and frame were cut off and new safety glass installed. Rear view mirrors were placed on each side of the windshield. A dropped and chrome plated 1932 Ford axle lowered the car up front. The front brakes and spindles were late model Ford equipment which, along with the 1932 Ford front spring and steering linkage also were chromed. The headlights were sealed beam replacement types, mounted so that the centers were above the 24" min, required by the State laws. Tubular shocks, mounted at an angle, were also chrome plated. The radiator was built from an assortment of parts, including a Chrysler core and late model Ford radiator bottom outlets. The core was cut down to size and the lower outlets were soldered in place to allow the hoses to clear the front crossmember. Top inlets, filler neck and steady-rod bracket were then added. The grille shell originated from a 1932 Ford as well. For city driving, the chromed exhaust headers had by-pass tubes that lead back through mufflers. Large plugs in the ends of the stacks could be removed for use in competition, reliability runs or speed trial events. The car was painted in a bright vermillion red and white, matching the official colors of their station's products, Mobilgas and Mobiloil. Power came from a 1942 Mercury engine that was fed through three Stromberg 97 carburetors fit with chromed velocity stacks. The intake manifold was a triplet type Weiand. Finned aluminum racing heads were also fabricated by Weiand. A hand pump was installed on the left side of the cowl so Sal and Louis could build up pressure in the tank to force fuel into the carburetors. The upholstery was done in a dark red and white plastic leather. The floor mat was carpeted in dark red with leather covered area under the pedals. Seven instruments were installed in the dash. These were from left to right: fuel air pressure, oil pressure, coolant temprature, tachometer, speedometer, vacuum inches, and ammeter. The steering column shift operated a transmission with 1942 Lincoln Continental gears. The rear end was from a 1940 Ford containing 3.54 gears. The rear shocks were tubular, mounted at 30 degrees angle. White side-wall tires were Mobil Premier. The car was built over a period of six months. Once completed, it turned out to be a huge customer attraction for their business, and it landed a featured story in Hot Rod Magazine July 1950 titled "SALES Booster".[1]

Around 1951/1952, Lou decided to build another 1927 Ford Model T roadster with his new business partner Jack Perre, and the roadster was sold to Don Chapman. While Don owned the car, it was featured on the cover of Car Craft February 1954. Don kept the body and chassis untouched but decided to hop up the engine up. He felt the mill that sat in it when he bought it was reasonably mild, and built for tooling around town. He stroked the engine 3/8", bored it 3 5/16" and ported and relieved it. A Howard M8 camshaft was also installed along with J.E. Pistons and a Kong ignition. The heads were 9 to 1 Weiand, and the intake and carburetors were the same as Sal and Lou installed. From mild to wild, Don could crank 105 mph on gas in the standing start quarter mile.[2]

August 14, 1957, Erick Rickman photographed the roadster for a featured story in Hot Rod Magazine December 1958. By then it was owned by Road Kings of Burbank member and actor Skip Torgerson who had painted it black. Skip later swapped the flathead for a small-block Chevy engine. Barr's Muffler in Studio City built headers for the car after the swap.[3]

Please get in touch with us at mail@kustomrama.com if you have additional information or photos to share about Louis Banto and Sal Macchia's 1927 Ford.