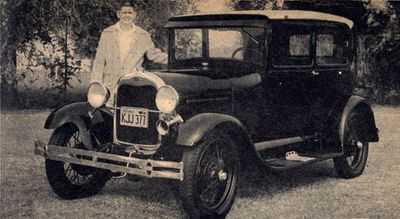 1930 Ford Model A sedan owned by Renegades member Lee Rhodes. Slightly different than his fellow club members' cars, Lee restored his sedan instead of restyling it. The car appeared in 1959 the same way as it rolled out of the factory in 1930. All the chrome items were chrome plated and the body was painted black. Lee used the original upholstery.[1]

Please get in touch with us at mail@kustomrama.com if you have additional information or photos to share about Lee Rhodes' 1930 Ford Model A Sedan.