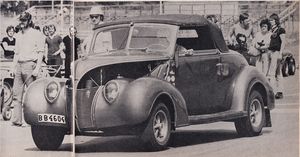 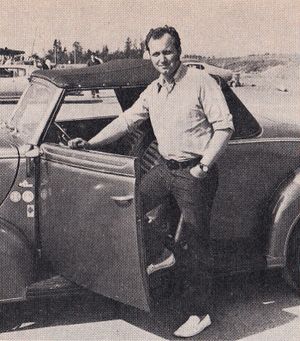 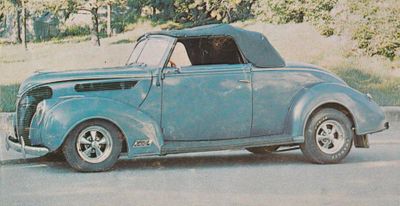 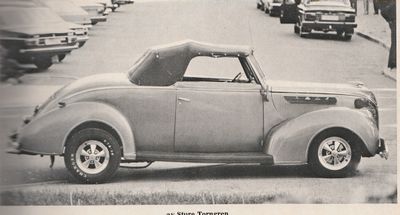 
Lars Andersson (b. 1943-10-29 d. 2022-09-27) , from Sundbyberg north of Stockholm, Sweden started modify his Ford 1938 DL Convertible in 1967.
He had bought the frame and body from Stockholm area.
Larre spent over 700 hours and six months on restoring the car. The objective was to get it authorized by TSV and SBP.
The engine was replaced by a 1946 flathead, bored to 3 5/16" and stroked to 4" using a Mercury crankshaft.
An Offenhauser manifold was supplied with three carbs, Stromberg in the middle and two Holleys. Headers and a Scintilla magneto ignition gave approx. 170 hp.
The transmission from a 1936 Ford was supplied with Lincoln gears and 3.78 in the rear end.


All work including paint was done by Lars and the total cost approx. 8.000 SEK.


"Larre" used the car frequently even in winter time both on the street and in Dragracing with an E.T. of 14-15 seconds over the quartermile.


By time the driveline was changed to a Ford-Y 312 ci V8, automatic transmission and a rear end from 1957 Ford. The engine was tuned with 3x2 Holley carbs on a Edelbrock manifold, a 280 degree cam and 11,5 comp pistons.
The transmission is modified by Larre with parts from Fordomatic and a newer FMX.


The wheels are 14" Cragar S/S with F70 tires in back. The top is sewn by Larre and his wife while the seat was done by a saddler.


Around 1990, other projects took place and the car was stored outside in the back of the garage at his house in Sundbyberg.


The plan was to restore the car, new parts was purchased and Larre never sold anything intending to fix it during retirement. Unfortunately, time passed away, the engine block was cracked by freezing and the car was successively dismantled by Larre. It was covered only with a torn tarpaulin giving hardly any protection.


In September 2022 Larre passed away at the age of 79. The sterbhouse sold the car to Björn Aurell from Bålsta who hopefully has the capability to do a full restoration of this iconic car back to the streets!

Please get in touch with us at mail@kustomrama.com if you have additional information or photos to share about Lars Larre Andersson 1938 Ford.