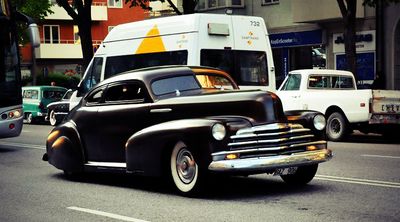 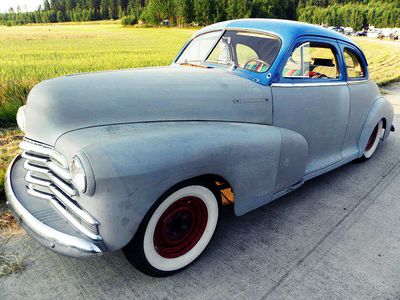 As it appeared in the summer of 2011. Photo by Jonathan de Besche. 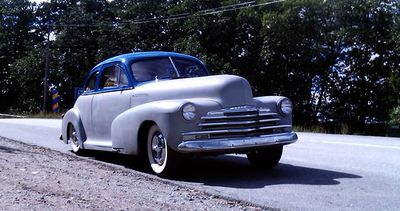 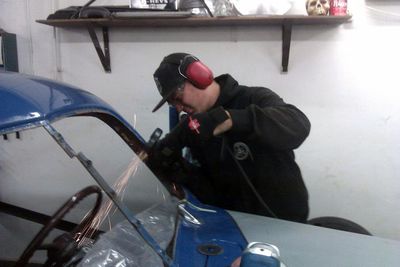 Jonathan cutting the A-pillar. Jonathan, Niklas Wall and Micke Öhman chopped the top nearly 6 inches at the c-pillars. Photo courtesy of the Hi-Revs. 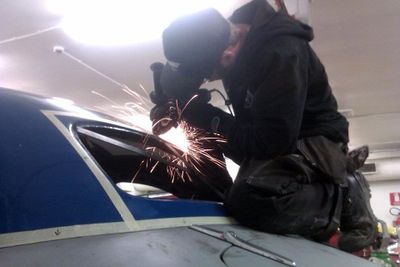 Cutting the rear window out. Photo by Jonathan de Besche. 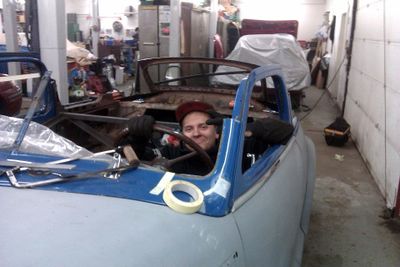 Photo courtesy of the Hi-Revs. 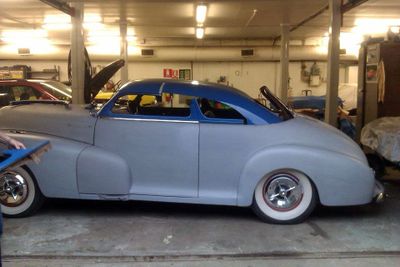 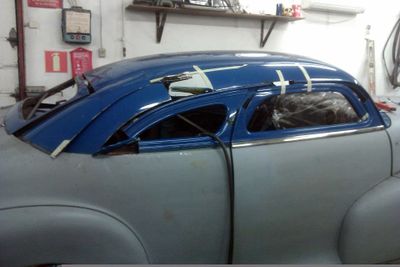 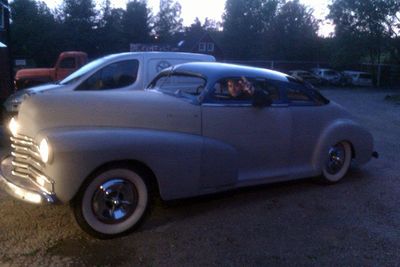 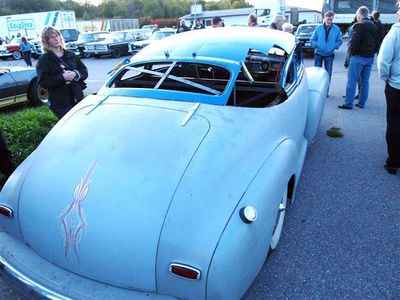 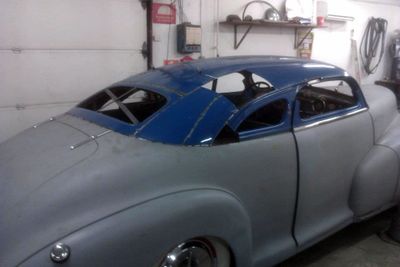 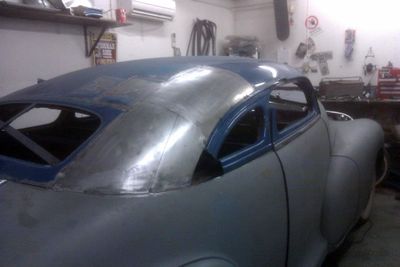 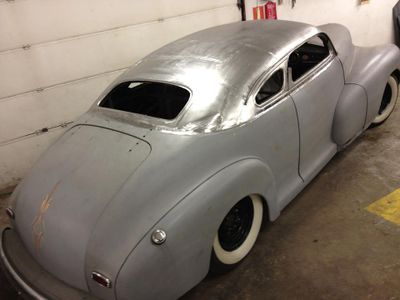 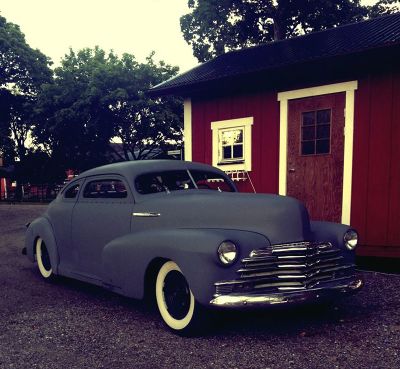 The summer of 2012, primer applied on the freshly chopped coupe. Photo by Jonathan de Besche. 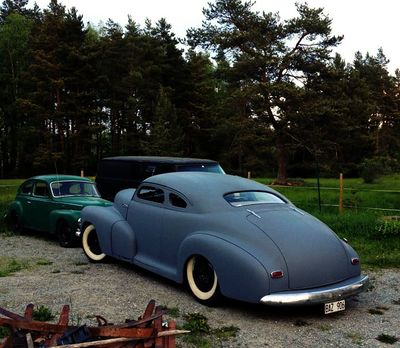 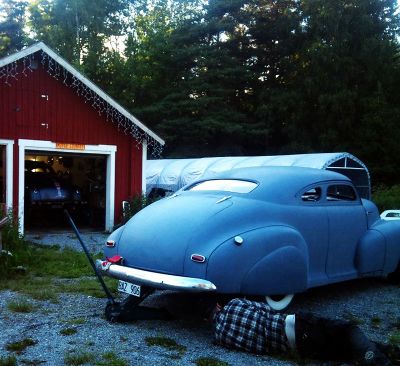 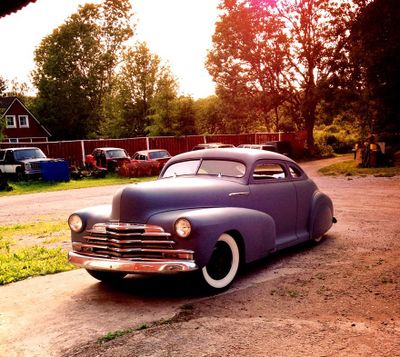 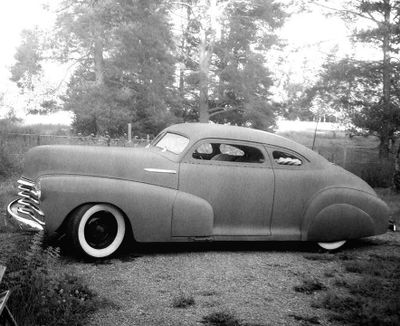 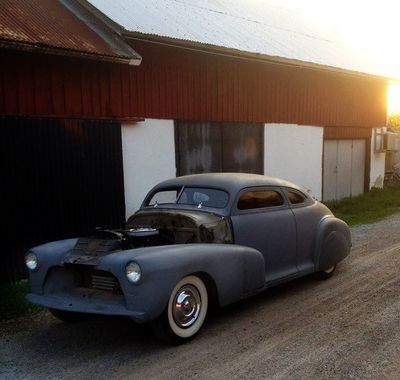 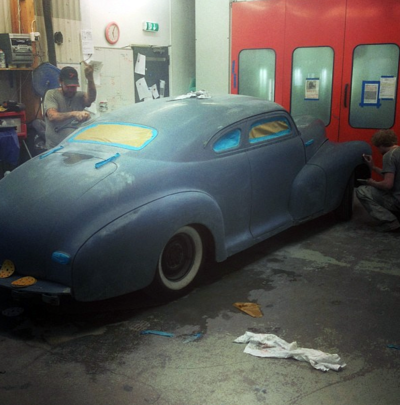 Getting ready for paint. Photo by Jonathan de Besche. 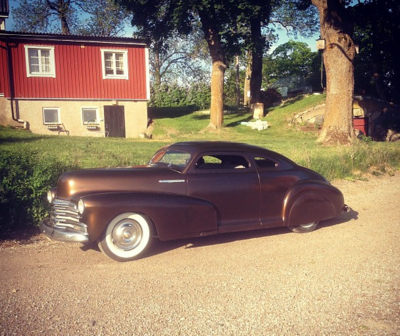 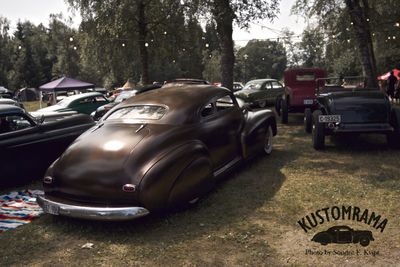 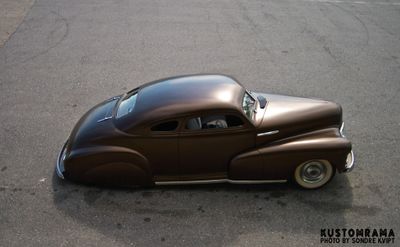 Jonathan's coupe on the way to the 2015 Pistons Rumble in Finland. Photo by Sondre Kvipt - Kustomrama.

1948 Chevrolet Stylemaster owned and restyled by Hi-Revs member Jonathan de Besche of Bålasta, Sweden. Jonathan bought the Chevy all original in the summer of 2011. After what he was told, the car was imported completely disassembled by two fellows. They rebuilt the car to its original condition and sold it. The guy de Besche bought it from, had plans of building a custom of the Chevy, however, that never happened. Jonathan heard of the car being up for grabs, so he, along with his dad and Niklas Wall went over to take a look at it. The car looked solid, and was a perfect starting point for a bitchin' kustom. Later the same evening, Niklas called Jonathan and told him he would help chop the top along with Micke Öhman if he bought the coupe. A deal was made, and Jonathan was now the proud owner of a 48' Chevy.[1]

The first weekend after buying it, he nosed, decked and shaved the car for door handles. The bumper guards were removed, and the Chevy was lowered as much as possible. It was fit with BF Goodrich 7.60-15 up front, and G78-14 in the rear. He used it like this the first summer, then when the winter came, it was time for a haircut. In May 2012, The car debuted at the Bastardized & Undertakers Fest with its freshly chopped top. He rode along with it with primer applied the whole summer. He began collecting parts to update the driveline. In August, 2012, the transmission broke down just outside his garage. He began to tore it down, throwing the transmission and rear end out. A new Chevy 350/th400 trans was installed, along with a 1955 Chevrolet rear end. The car was sanded and prepped for paint in May 2013. Fellow Hi-Revs member Fredde Cedsted painted it BMW Marrakesh brown with flat clear applied. A set of 1953 Oldsmobile hubcaps were installed, and the car was ready to hit the streets once again.[1]

Jonathan's plans for the car next winter is to molde the rear fenders, weld the two piece hood together, lower it a tad, and restyle the grille.[1]

Please get in touch with us at mail@kustomrama.com if you have additional information or photos to share about Jonathan de Besche's 1948 Chevrolet.