As it appeared in 1954. Photo by Dick Merrit 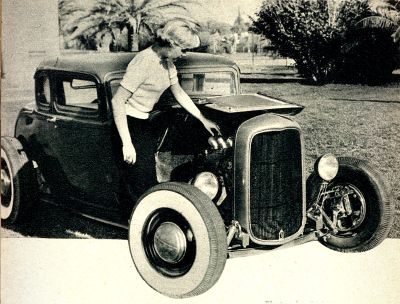 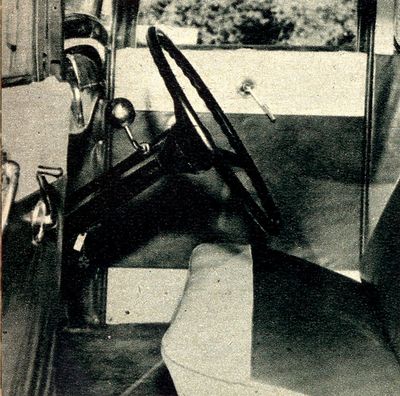 1932 Ford 5-Window coupe owned and restyled by John Patrick of Tucson, Arizona. John spent two and a half years building the rod of his dreams, he wanted to build a car which would be a unusual sight on the streets of his home town. The car was fit with a reworked 1946 Mercury mill, 1948 Ford juice brakes, 1949 Ford instruments and a 1948 Ford differential assembly. The body received a seven inch chop, which considerably lessened the overall height of the rod, and a stepped frame made way for a severe frame lowering job. Zumanos Custom Shop was responsible for the fine metal work applied by Charles Hall. The engine was reworked with a 3 3/8" x 4 1/8" bore and stroke job, a Potvin "Eliminator" cam, Edelbrock pistons, Sharp heads, a Harman & Collins ignition, Weiand 3-pot manifold with the carbs set up for alcohol-based fuel. John managed to get the coupe fuel record at the drags held near Phoenix with this set up. The car featured a 3.78 rear end, Zephyr gears, 8.20-15 tires in the rear and 6.40-15 up front. The coupe had a total weight of 2,300 lbs. In the early 1950's, hot rodding was not very common in Arizona, so John's Coupe made indeed a unusual sight in his home town Tucson, it was also featured in Rod & Custom November 1954 as the "Readers car of the month".[1]

Please get in touch with us at mail@kustomrama.com if you have additional information or photos to share about John Patrick's 1932 Ford.