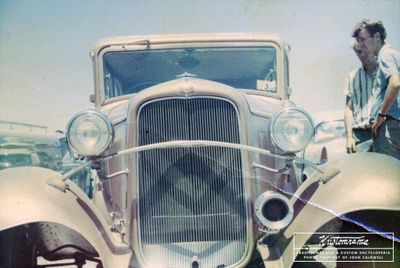 A photo of the 32 taken in 1965, after John had given it a Metalflake paint job. Photo courtesy of John Caldwell.

1932 Ford Four-door Sedan owned by Road Knights of Sydney member John Caldwell of Sydney, New South Wales, Australia. John joined the Road Knights with John Beer early in 1964. He bought the 32 sedan from Chuck May late in 1964. "It was a beater, but it ran well," he told Sondre Kvipt of Kustomrama in 2020. John did his mechanical apprenticeship at Ford's assembly factory at "Homebush" Sydney. "In Australia the 32 models where four-door sedan, roadster, sport coupe, roadster pick up, and four-door phaeton, in V-8 or 4 cylinders. All Fords had "Aussie bodies," pretty close to the American right up to the 1950s." According to John, finding a 32 in Australia was really hard and rare. "If you got hold of a 32, it was usually a pretty beat-up ex-farm job turned into a pick up."[1]

After buying the car, John found out that he wanted to give it a Metalflake paint job. "We saw those great "Metalflake" paint jobs, in the US hot rod magazines, but had no idea how to do it. There was nothing like that here back then." John had a relative that lived in Pomona, California, so he asked him to send him any info on how to spray the flake. "He sent me back a huge bag of it, along with an article on how to spray it," John recalled. With help from Johnny Hogan and Chuck May, John began preparing the car for its paint job. "Hogan and I worked together a Lamson Engineering. We sanded the '32. Mixed up this gold flake. Hit the compressor and flake was starting to dissolve. Like "French-polish," so we just let the car "have it" until we ran out of the stuff. The next day, the gold flake job looked moe like gold horse dung!! Also, we didn't know you had to spray clear over it, so although it looked ok from a distance, it was like sandpaper to touch!"[1]

John ended up selling the sedan to Johnny Hogan in 1965. It was his daily driver, and it ended its day later that year, under the Berala Bridge in Sydney, where Hogan got t-boned. "He was ok, and the 32 got parted out to club members."[1]

Please get in touch with us at mail@kustomrama.com if you have additional information or photos to share about John Caldwell's 1932 Ford.