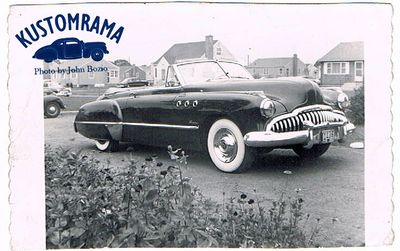 The first version of Bozio's 1949 Buick as it appeared in 1953. This version was nosed, decked and fit with Cadillac Sombreros. Photo courtesy of John Bozio. 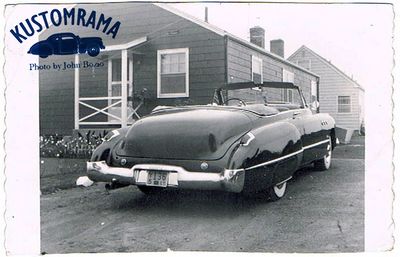 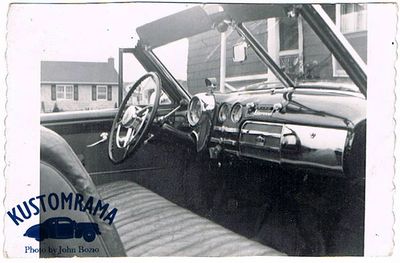 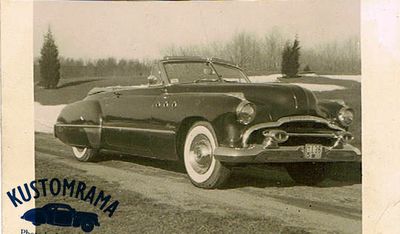 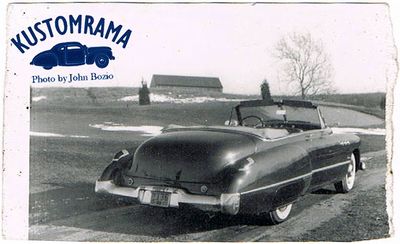 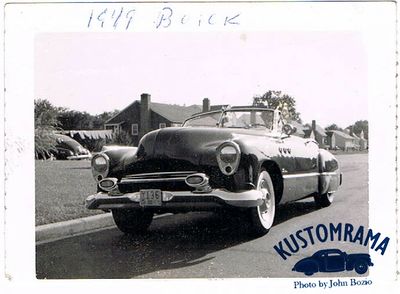 1949 Buick Super convertible owned and restyled by John Bozio of East Hartford, Connecticut. The Buick was John's second car, and he bought it in 1953, after his first car, a 1939 Buick convertible he had restyled, started having engine problems. John was 17 years old when he bought the Buick, and the first thing he did to it was to shave the hood and deck lid. The factory color on the Buick was a beautiful Midnight Blue, and after the car was nosed and decked, John had the hood and trunk repainted. John has always been very found of chrome, so he hooked with a guy that worked in a chrome plating shop. Trough his contact, he had several parts of the dashboard in the Buick chromed. John remembers that when he would pick up a chick and go cruising with the top down, sometime the wind would blow up under the big Poodle Skirts making it very hard for him to keep his eyes on the road. Some chicks thought it was funny, while other got pissed and put the word out about him. As with his first custom, this one was dressed up featuring Cadillac Sombreros as well. In 1955 John installed a 1954 Oldsmobile bumper and grille bar on the Buick. The stock black insets at the end of the grille were replaced with parking lights. The second version of the Buick was also fit with dual exhaust. A third incarnation of the Buick featured 1953 Buick headlight rings with half covers. According to John, half covers was the fad in East Hartford at the time. After restyling the front end, John never came around to paint the car again. The upper bar opening required some metal and lead work before it was ready for paint. This was no big concern for John, as what he really wanted was more power under the hood. The Straight Eight wasn't cutting it, so when Buick came out with the first V8 John was all over it. He thought about doing a V8 conversion to the '49 as it had a three speed standard transmission, but instead he traded it for a 1953 Buick later on in 1955.[1]

Please get in touch with us at mail@kustomrama.com if you have additional information or photos to share about John Bozio's 1949 Buick.