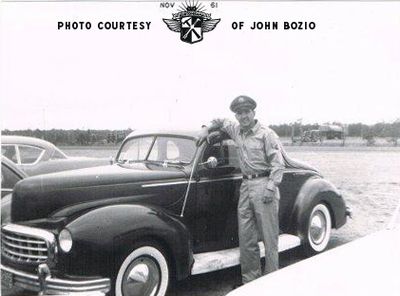 An early version of John's coupe prior to the side pipes. Photo courtesy of John Bozio. 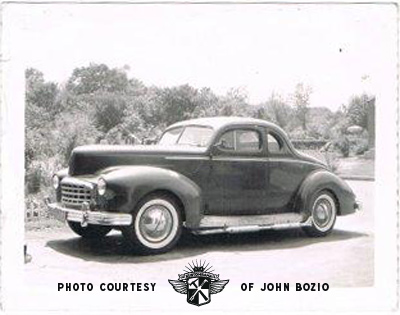 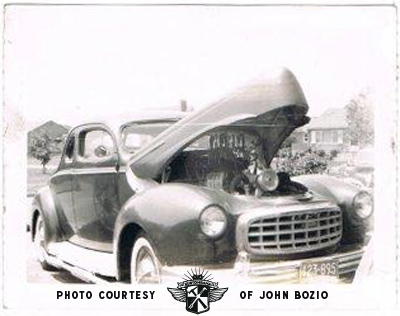 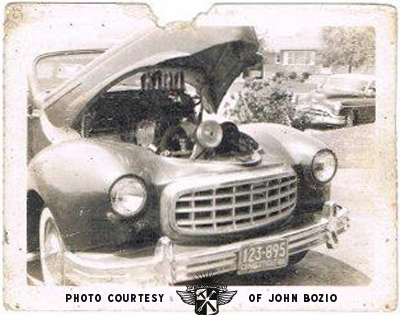 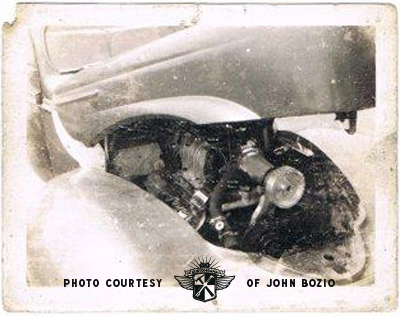 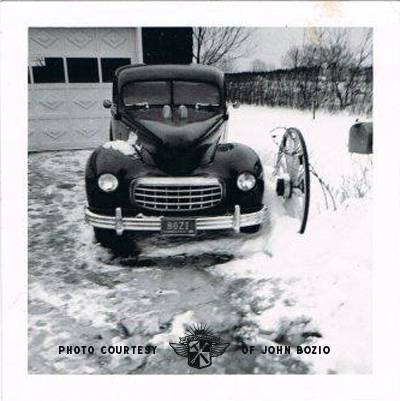 1940 Ford Coupe owned and restyled by John Bozio of East Hartford, Connecticut. John bought the coupe as a work in progress in 1959. The young man he bought it from had just gotten married and had a child on the way, so he needed the money. When John got the car, it had been fit with a 1949 Nash grille, the headlights were frenched and the door handles were shaved. The nose was damaged, and it needed to be re leaded. The hood was gone and the interior was gutted. John completed the car, and used it as his daily driver. He shortened the trim on the hood and installed ribbed 1948 Plymouth bumpers along with after market flat cone shape hubcaps. The bumpers fit perfectly, but in reverse order. The rear bumper was installed up front, and the front bumper went in the back of the coupe. Power came from a 1955 Chrysler 300 HEMI that ran four Stromberg 97 carburetors. Side pipes made up from Harley Davidson motorcycle chrome mufflers and fish tail tips were fabricated and installed along with flipper hubcaps. In 1960 John did an engine conversion so that he could put down the guys with newer cars, and a GMC 4.71 blower was installed. With the blower installed, John had to cut holes in the hood for the stacks on the carburetors. John sold the coupe in 1962. The guy that bought it wanted it for a 1/4 mile NHRA drag car. The first thing the new owner did was to remove the complete nose because of all the extra weight because of the lead work. The custom nose was replaced with a stock 1940 Ford nose. The custom nose was put on the front lawn of his farm house with a for sale sign. The car did well at the drag strip. Around 1983 John Bozio tried to locate the car. He had a few tips of sightings of the car that he followed up, but found nothing.[1]

Please get in touch with us at mail@kustomrama.com if you have additional information or photos to share about John Bozio's 1940 Ford.