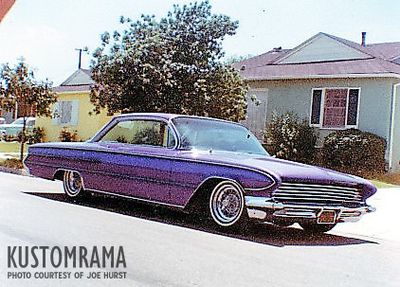 A photo of Joe's Buick in front of Dennis McKee's house. Photo courtesy of Joe Hurst. 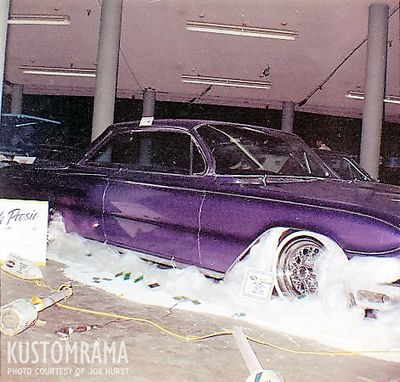 A photo of the Buick that Joe believes he took at the 1964 Tridents Rod Custom Autorama. Photo courtesy of Joe Hurst. 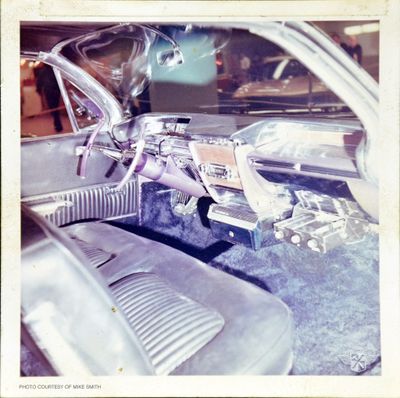 An interior shot of the Buick from an indoor car show showing the cut down steering wheel, Joe's RCA Record player and a 4-track tape deck. Photo from the Mike Smith collection, provided by Howard Gribble.[1] 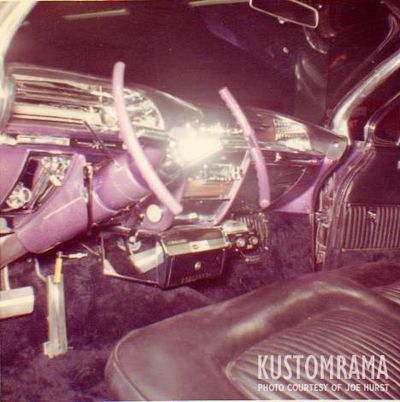 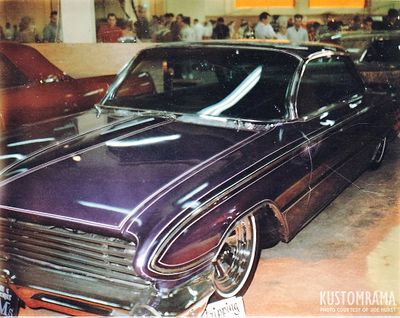 In 2016 Joe Hurst told Kustomrama that this was the Buick at it's best; "After Larry Watson touched up the paint." The pinstriping was done by Watson or Steve Feinberg. Photo courtesy of Joe Hurst. 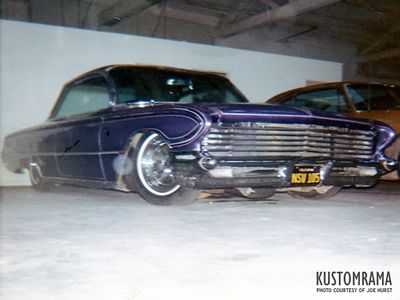 Joe's Buick was nosed, decked and shaved for door handles, portholes and emblems. The headlights were moved back a couple of inches and covered by a tube bar grille, a very illegal modification at the time. Joe and his friends Dennis McKee and Steve Drale worked for Carl Burns, a custom painter on Hawthorn Blvd known as Mr B, at the time, and they stripped all of the paint off Joe's Buick and Steve Drale's 1958 Cadillac Brougham in Carl's shop.[2] Their plan was to have both cars ready for the 1963 Tridents Rod Custom Autorama at the LA Sports Arena. In 2016 Joe told Kustomrama that his Buick was painted Blue Indigo Metalflake; "The color was half Royal Blue and half Violet Metalflake, a 50/50 mix. The flake came in a big bag and was not mixed by us. It came to us as blue indigo. It was on the flake chart as I recall, that is where I chose it from." The Brougham was painted in a Candy Ink. Lowered with a forward rake, Buick Skylark Wire Wheels wrapped up the style.[3]

Inside, Joe's Buick was fit with a cut-down steering wheel, another illegal modification. The steering wheel and column were given a fadeaway paint job. The bottom of the door panels, kick panels and floors were covered with black long hair carpet. "Jim Boyd really liked that. Somehow I always seem to have a competition with him, but I could never match his dollars."[3] A RCA Record player and a 4-track tape deck provided Joe with the latest music while cruising the streets of Torrance and surrounding areas.[2] At first, Joe had an ARC Record player, a Chinese made imitation; "I had real problems with the ARC that was made in China. I had to replace three of them and they always seemed to fail. So on the fourth one I took the brand new one in the box and traded it for a RCA used one, I do believe that was with Dennis McKee. The ARC would only play 8 at a time and the RCA you could stack 14 or 15," Joe told Kustomrama.[3]

Larry Watson of Watson's House of Style had to do touch up on the paint job on the Buick on two separate occasions, and he gave it a fadeaway paint effect to make it blend. This version was also pinstriped, either by Watson or Steve Feinberg.[3]

Please get in touch with us at mail@kustomrama.com if you have additional information or photos to share about Joe Hurst's 1961 Buick.