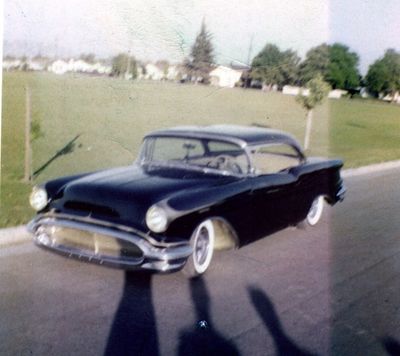 A color photo of Joe's Oldsmobile. Photo courtesy of www.rodandwheelers.net 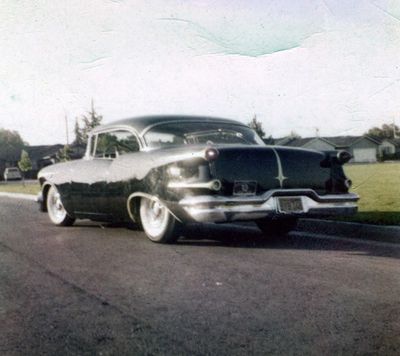 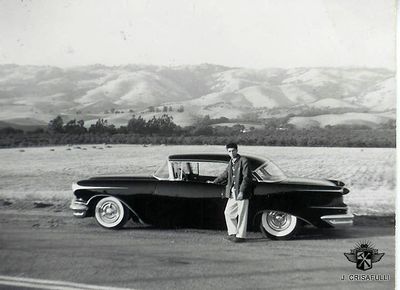 A photo of Joe with his Oldsmobile dated July 1957. Photo from The Joe Crisafulli Scratchbook and Photo Collection.

1956 Oldsmobile owned and restyled by San Jose Rod and Wheelers member Joe Crisafulli of San Jose, California. Joe bought the Oldsmobile in December of 1956. He was 20 years old at the time, and had saved for a long time just for the down payment. At the time he worked as an apprentice painter at a G.M.C. truck shop, and they let him use the torches at the shop to weld the hole in the hood after he had shaved it. He was not allowed to use the paint booth, so he gave the car a shiny black paint job with gold scallops in the family garage, on a cool summer night in 1957. The garage was a garage with a dirt floor and no doors. Joe recalls that it was Friday 11 pm when he finished painting the car. He drove it to work on Monday. Before the car was painted, Joe had lowered it and removed all moldings. The door handles were shaved and filled, and the original bar was removed from the grille. After removing the bar, a 1934 Chevrolet grille was installed inside the opening.[1]

Please get in touch with us at mail@kustomrama.com if you have additional information or photos to share about Joe Crisafulli's 1956 Oldsmobile.