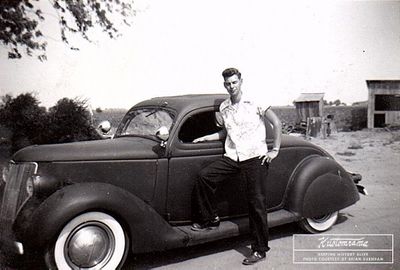 A photo of Bud with his 1936 Ford 3-Window Coupe that he built in the late 1940s. According to his grandson, Brian Burnham, the coupe was Bud's pride. Photo from The Joe "Bud" Simmons Photo Collection. 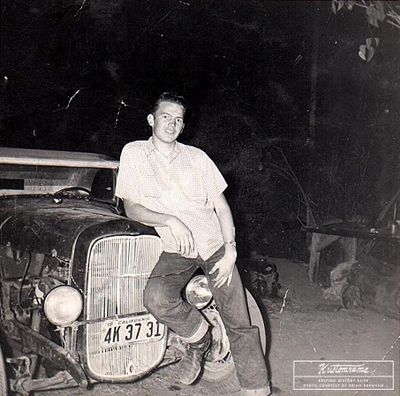 A friend of Bud in front of Bud's 1928 Ford Model A roadster. "In the pic, you can see the removable aluminum top he made for it in high school metal shop." The car was also dressed up with a filled 1932 Ford grille shell. Photo from The Joe "Bud" Simmons Photo Collection.

Joe "Bud" Simmons of Chowchilla, California. Bud was a founding member of the Thorle Benders car club. According to his grandson, Brian Burnham, it wasn't a big club, "just a bunch of farm kids from the California Central Valley." The members of the club were from the town of Chowchilla, California. Bud's pride was a 1936 Ford 3-Window Coupe that he built in the late 1940s. The car featured a filled roof, solid hood sides, dual spotlights, and flipper caps. Unfortunately, the car was totaled by a drunk driver shortly before Bud left for Korea in 1950. Brian tells us that his grandpa was into motorcycles from a young age, and he and his grandmother were members of multiple motorcycle clubs in the 1950s.[1]

Please get in touch with us at mail@kustomrama.com if you have additional information or photos to share about Joe "Bud" Simmons.