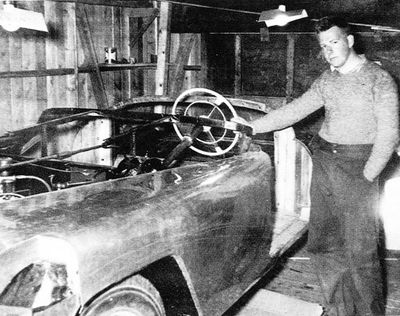 A construction photo of Joar with the LeSabre that appeared in Rolf Larsen's book I grenseland. A body structure made from t-iron, angle iron, and wood was fabricated on top of a 1939 Ford chassis. The structure was then covered with aluminum panels. Photo from the collection of Joar Kristiansen, courtesy of I grenseland. 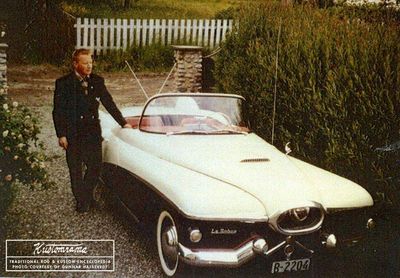 Joar Kristiansen's LeSabre. Inspired by Harley Earl's 1951 GM LeSabre the build was started in 1953 and completed in 1957.

Joar Kristiansen of Askim, Norway. Joar was born and raised in Askim, a little town in Østfold county. He was known around town as a real “Gyro Gearlosse”. Joar loved mechanical work and finding new ways to solve technical issues. His father worked at Askim Gummivarefabrikk, repairing sewing machines. In 1946, the same year as GM decided to retire their Y-Job and build the LeSabre, Joar became an apprentice at the factory, working alongside his dad. He went on to become a mechanic, spending the next 48 years there. After returning from military service in 1952, Joar was aching for a car. Reading about all kinds of American made automobiles in magazines and newspapers, there was one specific car Joar couldn’t get out of his mind; Harley Earl’s LeSabre! A small black and white photo of the car that ended up on the garage wall as a template for his first car in 1953.[1]

Please get in touch with us at mail@kustomrama.com if you have additional information or photos to share about Joar Kristiansen.