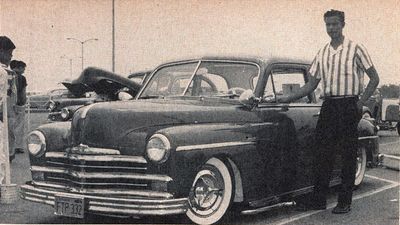 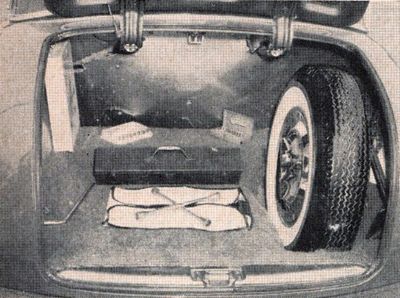 1949 Plymouth owned by Jim Conley of Paramount, California. Jim's Plymouth was nosed, decked and shaved for door handles to give it a smoother appearance. The bumper guards were removed as well, and chromed exhaust cutouts were installed. A metal pan was added under the louvered hood. The pan kept the engine dry during rainy weather, and a speaker was mounted in it as well, perhaps to talk to slow drivers over to the right on four-lane highways. The body was done in striking Sierra Gold Enamel, with striping by Baron & Kelly. The car was lowered and fit with Oldsmobile Fiesta hubcaps and spotlights. Inside the window frames were chromed, and the interior was nicely done in yellow and white tuck & roll Naugahyde upholstery. Carpet was edged in yellow white to match, The rear trunk compartment was carpeted, and a set of tools and first-aid kit was installed.[1]

Please get in touch with us at mail@kustomrama.com if you have additional information or photos to share about Jim Conley's 1949 Plymouth.