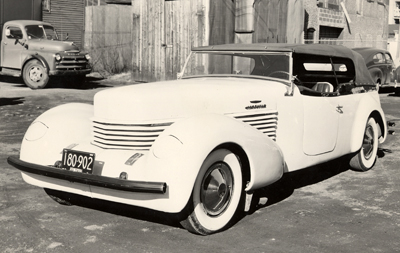 Martin S. Papazian's Cordster of Worcester, Massachusetts. The first version of Martin's Cordster was completed in 1953. In 1955 the top was chopped and the car was fit with a widened laydown windshield from an MG. Martin’s objective in building the Cordster was to produce a “Sports Custom” family car. He felt that the two seater sports cars of the day were limited to people that could afford to own two cars, so he set out to create his own. Jack purchased the Cordster from someone at a gas station near the Sheppard Air Force Base in the 1970s.

Please get in touch with us at mail@kustomrama.com if you have additional information or photos to share about Jack Glover.