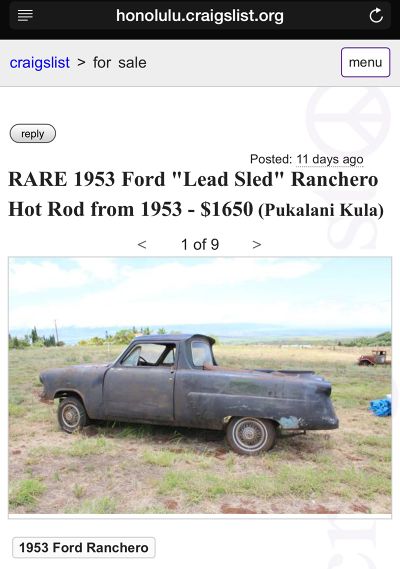 Howard's Ford as it sat when it was advertised for sale on Craigslist in August of 2015. Photo courtesy of Brian Volk. 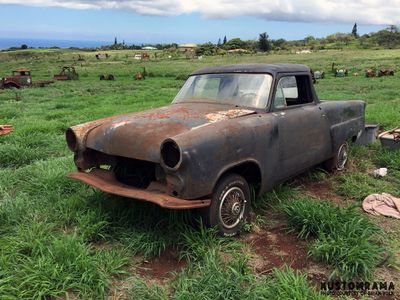 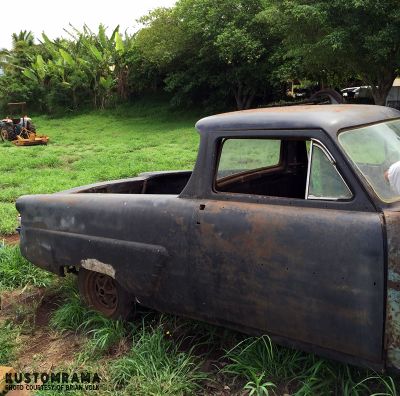 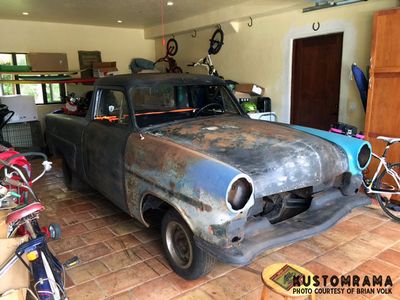 A photo of the Ford in Brian Volk's garage. Photo courtesy of Brian Volk. 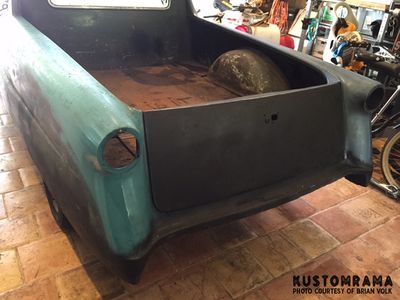 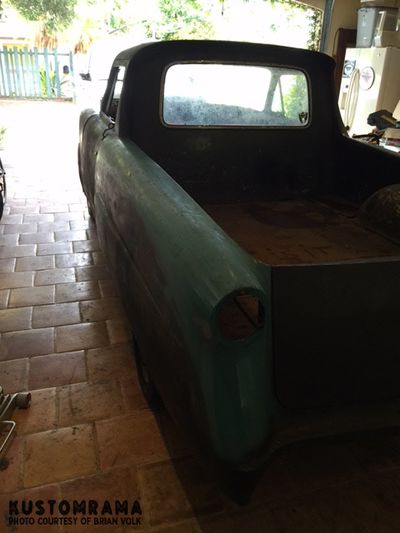 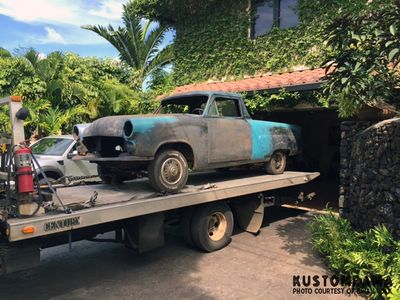 A photo of the car taken the day it was picked up for shipping to California. Photo courtesy of Brian Volk.

1953 Ford pick up owned and restyled by Howard Yoshimoto of Maui, Hawaii. Howard was an expert body and fender man, and the pickup was built at Henry's Auto Body in Wailuku, Hawaii in 1953. It started life as a 1953 Ford two-door sedan front half, and a 1952 Ford station wagon back half. The front was grafted onto the rear end, forming a "Ranchero" type pick up, 4 years prior to Ford Motor Company. All work by Howard was done in lead. In the back of the cab, Howard grafted on the station wagon top hatch into the rear of the passenger compartment.[1]

In 1987 the car was put in storage in a barn in Kokomo. It stayed that way until it was advertised for sale on Craigslist in August of 2015. At the time it was located in Pukalani Kula, and the asking price was $1650. The car was sold without an engine and transmission, and it came with boxes full of parts. Brian Volk of Maui, Hawaii bought the car in August of 2015.[1]

After buying the car, Brian sent the old custom to Volk Auto Construction in San Luis Obispo, California for restoration. The shop is run by Brian's brother. Brian and his brother found a donor parts car containing most of the parts he needs, including a flathead engine. In December of 2015 Brian told Kustomrama that the "ranchero" will remain a true 1950s custom when they finish it, with all NOS and flathead upgrades, keeping the look and originality; "All body repairs will be done in lead as it was done when the car was created in 1953."[1]

Please get in touch with us at mail@kustomrama.com if you have additional information or photos to share about Howard Yoshimoto's 1953 Ford.