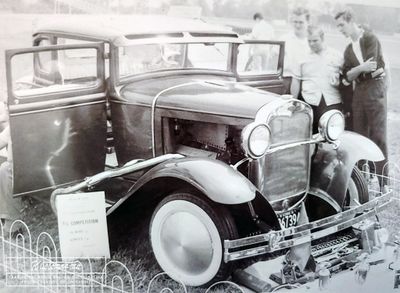 An early iteration of the Alzan running full Moon discs. This photo was taken in 1959, shortly after Howard had begun building the car. Mitchell traced down later owner Jim Shrull around 2000 and sent him the photo. Photo courtesy of Jim Shrull. 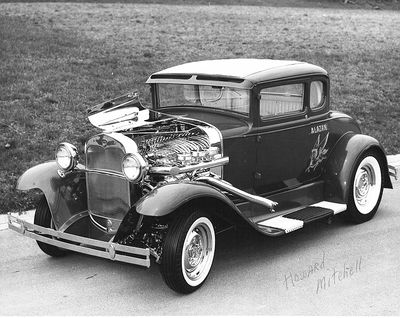 A photo of the Alzan as it appeared when it was featured in Rod & Custom February 1962. By then the car had received a heavily chromed 1957 Lincoln engine. Photo from the "Fuzzy" Fuerholzer Collection. 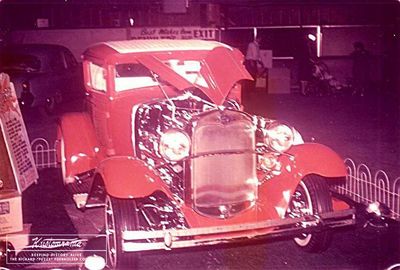 A photo of the coupe taken at the Illinois Valley Idlers Rod & Custom Shop. Photo from The Richard "Fuzzy" Fuerholzer Collection. 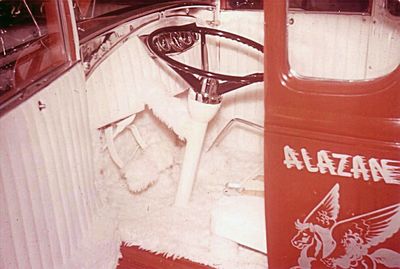 Orlando Upholstery of Chicago upholstered the coupe for Mitchell. It featured white Naugahyde seats and white custom rugs. The dash was padded and dressed up with a chromed instrument panel that ran Stewart-Warner gauges. Photo from the Dick "Fuzzy" Fuerholzer Collection. 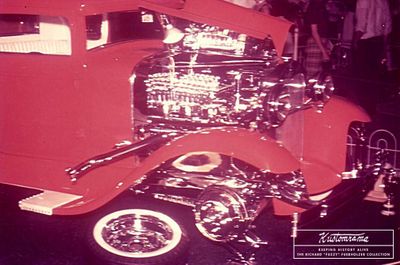 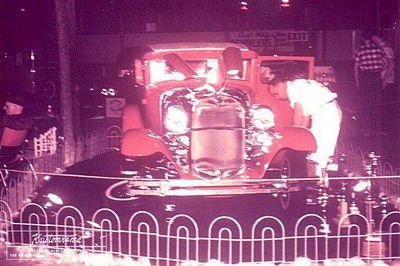 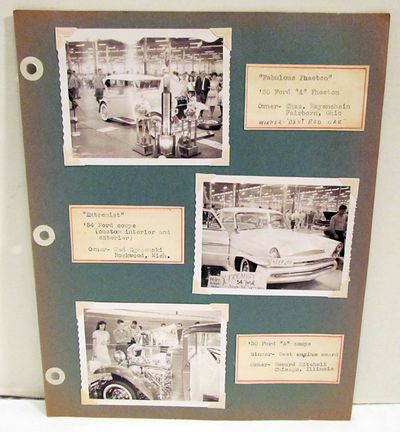 An album containing a photo of Howard's coupe at the 1960 National Champion Custom Car Show in Detroit was advertised for sale on eBay in October 2011. 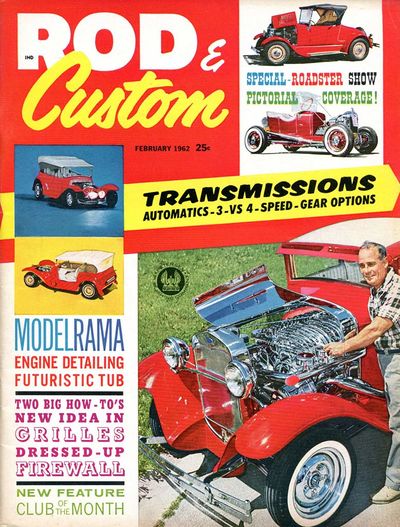 The heavily chromed engine and engine compartment of Howard's coupe appealed to the magazines, and early in 1962 a photo of the car was featured on the cover of Rod & Custom February 1962. 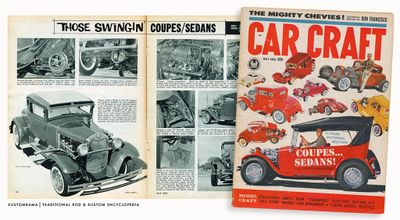 A couple of months later the car was also featured on the cover of Car Craft July 1962. The Car Craft story featured photos by Bob Hegge. 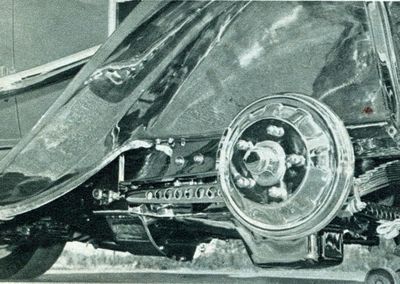 Chrome galore. Even the wheel wells on the car were chromed. Photo courtesy of Car Craft Magazine. 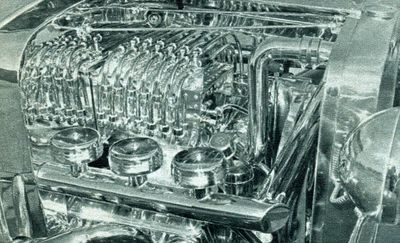 Howard ran a McCulloch-Paxton blower in the coupe, and he had a theory that several small tubes were better than one big one, so he made several air tubes that fed the blower. Photo courtesy of Car Craft Magazine.

Another shot of the Alazan from the Car Craft July 1962 story. Photo courtesy of Car Craft Magazine. 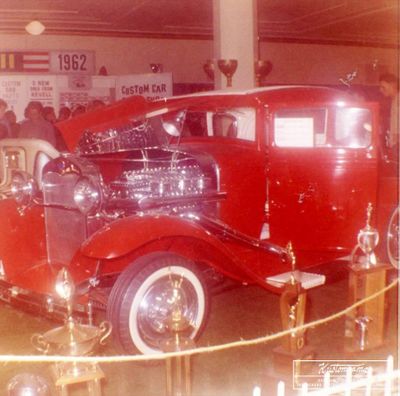 A photo of the Alazan taken at the 1962 National Champion Custom Car Shows that was held during the NHRA Nationals in Indianapolis, Indiana. Photo from The Richard "Fuzzy" Fuerholzer Collection. 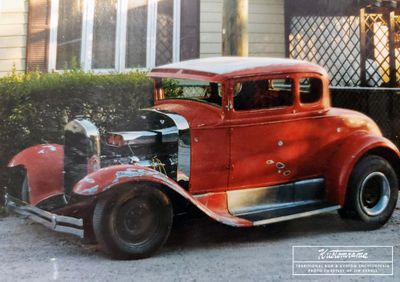 A photo of the Alzan as it appeared in 1985, when Jim Shrull bought it from a fellow in Grand Junction, Colorado. Photo courtesy of Jim Shrull. 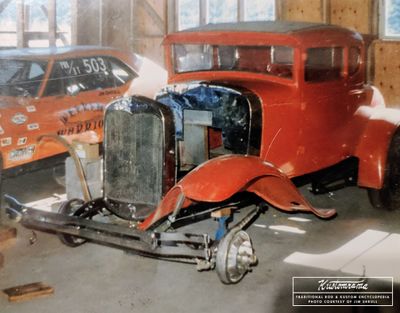 After buying it, Shrull tore the car down and began rebuilding it. Photo courtesy of Jim Shrull. 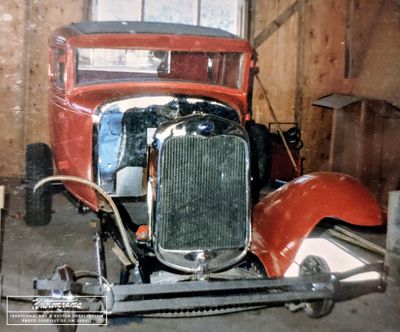 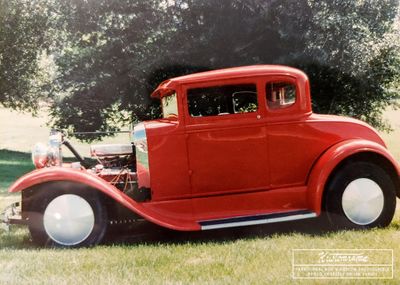 The Alzan as it appeared after Shrull had rebuilt it. Photo courtesy of Jim Shrull. 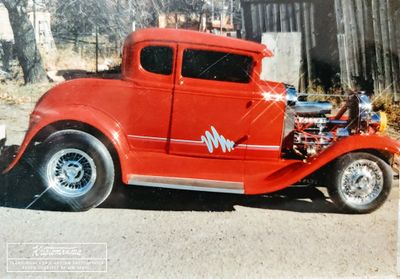 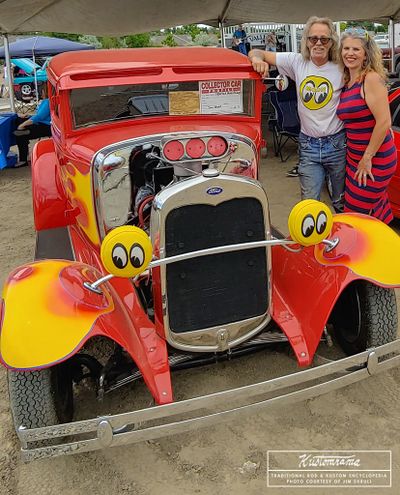 A photo of Jim with the coupe as it appeared in 2019. By then Jim had owned it for 33 years and he had dressed it up with a flame paint job. Photo courtesy of Jim Shrull.

1930 Ford Model A Coupe owned and built by Howard Mitchell of LaGrange Park, Illinois. Featuring a heavily chromed Lincoln engine and engine compartment the car was very popular at the big shows. It received plenty of magazine ink, and became known across the US as the "Alazan."

From strip to show

Mitchell's coupe started out as an A/G class competitor at the drags. At the time Mitchell was a high school kid that spent evenings and weekends building engines for drags. According to a story that appeared in Car Craft July 1962, he started a rod club around the same time, and he turned 116 miles per hour with an E.T. of 12.90 at the midwestern strips. A car club invited Howard to enter the coupe at their show. He came. He showed and went home with three trophies - Best Engineered Car, Best Competition Coupe, and Best Engine Compartment. He was now hooked for shows and decided to go all the way with the Alazan.[1]

When it comes to body modifications, Mitchell's coupe featured a 3 1/2 inches chopped top. A modified '30 grille was installed along with 1932 Ford headlights. He kept the stock bumpers. The entire frame on the car was chromed, and/or painted, and according to the Car Craft story, "...it's been chromed within an inch of its life...even the wheel wells."[1]

Power came from a bored and stroker 1957 Lincoln engine. The engine and engine compartment were heavily chromed, and it ran a McCulloch-Paxton blower. Howard had a theory that several small tubes were better than one big one, so he made several air tubes that fed the blower. The mill ran a Grancor crank, reworked valves, a Herbert roller cam, Forgedtrue pistons, milled heads, two four-barrel Rochester carbs, dual electric fuel pumps, Mallory magneto ignition, a Schiefer flywheel and other goodies.[1]

Mitchell installed steering from a 1959 Renault and a 1954 Mercury station wagon automatic transmission with Corvette linkage in the little coupe. Up front, it ran a dropped, drilled, and chromed 1940 Ford axle. The front suspension was transverse leaf with Gabriel shocks. All work on the car, except for upholstery, was done by Howard, and according to the Car Craft July 1962 article, four years of hard work and a lot of money went into the build, making it very popular at the big shows. The body received a Swift Red lacquer, that Mitchell laid in his garage.[1]

Orlando Upholstery of Chicago upholstered the coupe for Mitchell. It featured white Naugahyde seats and white custom rugs. The dash was padded and dressed up with a chromed instrument panel that ran Stewart-Warner gauges.[1] Photos taken in 1959 shows the car running full Moon discs. These were later replaced with chromed wheels. Both versions ran whitewall tires.

In May of 1963, Mitchell came second in Best of Show at the Spring-O-Rama auto show in the Rockford Armory with the Alazan. He also won an award for Best Engine and first in the Competition Show Coupe Division with the car.[2]

In 1985 Jim Shrull of New Castle, Colorado bought the car from a fellow in Grand Junction, Colorado. "He bought it from the guy in Colorado Springs in the early 1980s," Jim told Sondre Kvipt of Kustomrama in 2019. When Jim got the car, the Lincoln engine was gone, and the old show car was in need of restoration. Shrull tore it down and began rebuilding it. The restored iteration of the car ran full Moon discs. These were later replaced with wire wheels. Keeping up with current trends, Jim added custom graphics to the side of this iteration of car. Jim still owned the car in 2019. By then the custom graphics had been replaced with a flame paint job.[3]

Please get in touch with us at mail@kustomrama.com if you have additional information or photos to share about Howard Mitchell's 1930 Ford.