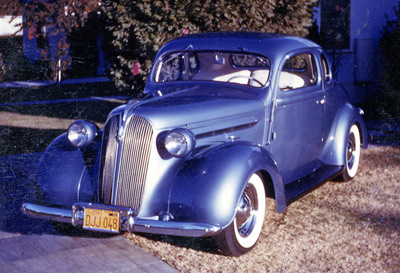 Heinrich's Auto of San Jose, California was a father and son shop run by Abe and Leroy Heinrichs. Heinrichs was a well known place in San Jose to take your car for a lowering. Doug Osterman, who had two of his cars lowered by Heinrichs believes that was what they did the most of.[1]

Abe and Leroy did also do custom engine installations, general tune ups and other mechanical repairs as well. In the 1960s, if you attended a local car show, you would often see a "Lowered by Heinrichs Auto" sign placed next to several of the cars at the show.[1]

According to Doug, Abe was a very clever man with his hands, and he doesn't know about any other custom shop in San Jose of that era that could do the kind of A-frame modification or straight axle modification work that Abe did. When Abe lowered the front on Doug Osterman's 1937 Plymouth Coupe, he cut the straight axle off at each end, fabricated two custom metal Z shaped plates out of new metal stock, and then welded those two plates where he had cut the axle.[1]

Leroy did the majority of other lowering techniques using a torch. Leroy would either cut the front coils, or he would heat them to lower a car depending on how the owner wanted it done.[1]

Please get in touch with us at mail@kustomrama.com if you have additional information or photos to share about Heinrichs Auto.