The Alex Jordan, Jr.'s Special of Madison, Wisconins. The Jordan Special was built by Harry Whitehorse. 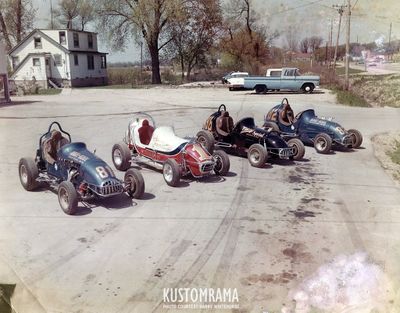 Harry Whitehorse of Monona, Wisconsin. Born in 1927, Harry came into this world in a wigwam near the Indian Mission in Black River Falls, Wisconsin. Harry is a member of the Ho-Chunk tribe. His uncle was an accomplished silversmith, carver and artist, and Harry got an interest in art at an early age. He learned to fashion small bits of silver into designs taken from nature, hoping to sell them alongside the more advanced work of his teacher. When Harry was a young child, he attended Tomah Indian Boarding School, as was the custom of the day. There the art teachers observed his alreadyimage well-developed talents and continued to tutor him the areas of oil painting and drawing.[1]

Harry's interest in art continued through military service in WWII, where Harry had the opportunity to view the great art museums of the Orient and Europe. This influence convinced Harry to pursue a career in art after his tour of duty.[1]

At the University of Wisconsin, Harry studied human and animal anatomy. He graduated from the Colt School of Fine Arts in Madison where he continued to study oil painting in the style of the old masters. He also graduated from a local technical college where he learned welding and metal fabrication.[1]

The Whitehorse family ran a body shop and salvage yard on the south-east corner of Madison, called Chief Auto Body, and Chief Auto Parts. Body filler was often used to create and finish his art projects.[2]

In the 1940s or the 1950s Harry buuilt The Alex Jordan, Jr.'s Special for Alex Jordan, Jr. of Madison, Wisconsin. Alex was best known as the creator of the House on the Rock, an eccentric architectural and entertainment attraction in Spring Green, Wisconsin. According to Harry's wife, Deb Whitehorse, Harry always laughed about the car, shaking his head, and kind of treated it as joke; "Harry was much more proud of the other custom sprint cars, midgets, and other cars he built. The coolest one was a Chrysler Imperial he converted to look like a Cord. There was also a '57 Chevy he shortened up."[3]

The auto body shop and salvage yard were doomed when the new south beltline highway was completed and the salvage yard and shop were exposed to the general public traveling on the highway on a daily basis. There was a mobile home park next door to the salvage yard that was also removed in the process.[2]

Please get in touch with us at mail@kustomrama.com if you have additional information or photos to share about Harry Whitehorse.