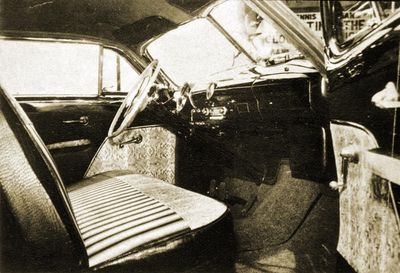 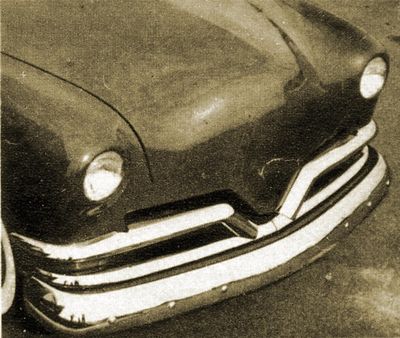 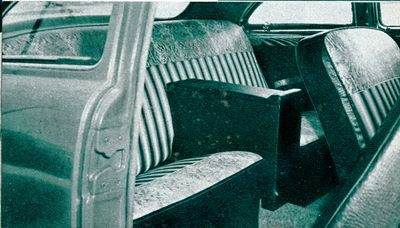 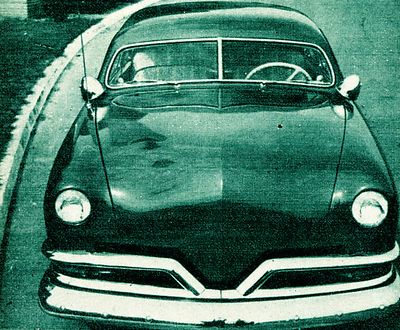 1949 Ford Club Coupe owned and restyled by Harold Scott of Richmond, California. Harold was an ordinary fellow from Richmond, he owned a 1949 Ford which he wanted to change the design on to the way he wanted it to look. He spent his sparetime whenever he could in a span of six months reworking his shoebox Ford. Harold and a good friend of his went down to business and started by chopping the top 4 inches. The front was reworked by installing a 1951 Pontiac grille, due to this modification, they had to reshape and extend the hood. The duo shaved the hood and made a peak in the center which ran towards the grille. The front bumperguards were shaved and the headlights were frenched. The duo channeled the body 3 inches and shortened the trim on the doors. The rear fenders were molded in to the body to achieve a cleaner appearance. After the buddy's had nosed, decked, and shaved the car for door handles, they painted it "mad" pink as the duo called it. For comforts sake, a bar was installed in the rear seat! The interior was reupholstered as well. Dual spotlights wrapped up the style on Scott's low budget custom. All the work was done at Harold's home with a total expense of only $ 300.[1]

Please get in touch with us at mail@kustomrama.com if you have additional information or photos to share about Harold Scott's 1949 Ford.