From Kustomrama
(Redirected from Granada)
Jump to: navigation, search

The first version of Chuck's Dodge, named "Mariette", at the 1958 Hot Rod & Custom Car World's Fair in West Springfield, Massachusetts. At the show, Chuck took home the first prize in the open conservative class. This photo was printed in Rodding and Re-styling January 1959. Photo by Alex Walordy.

The Mariette version of Chuck's Dodge as it appeared in Custom Cars June 1959. Photo by Woody Higgins 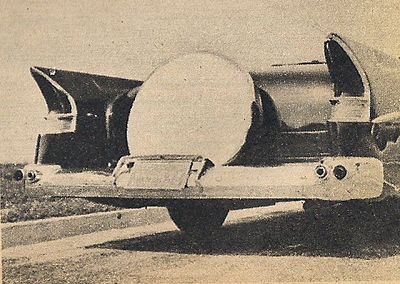 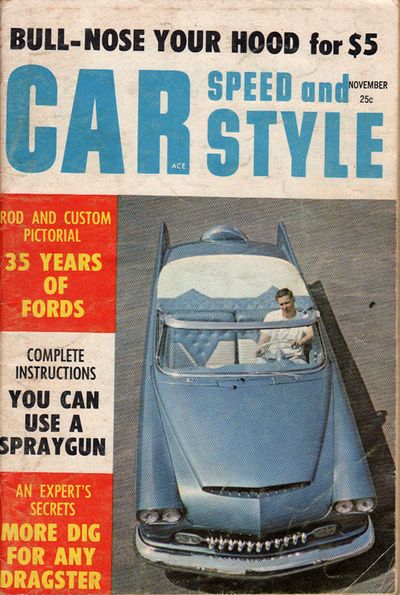 A second version of Chuck's Dodge was featured on the cover of Car Speed and Style November 1959. This version had been restyled further by Chuck, and painted Bahama blue. 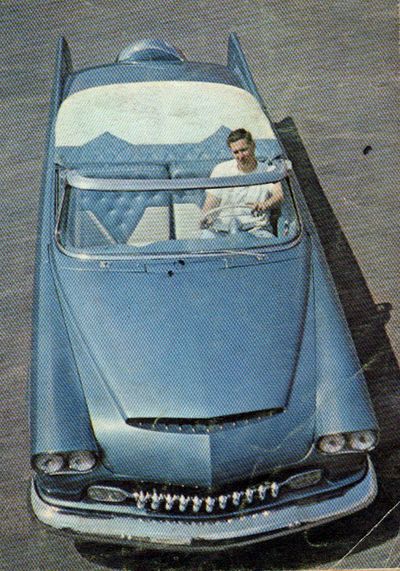 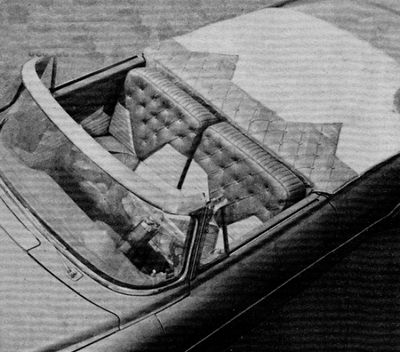 The second version of the car featured an elaborate combination of blue button tufting and white pleats upholstery by Fred B. Wolfe. Photo by Woody Higgins 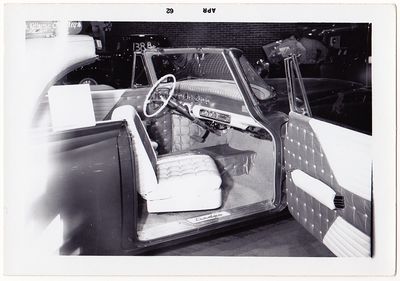 A photo of the third and radically restyled version of Chuck's Dodge dated April 1962. Photo from The Rik Hoving Custom Car Photo Collection. 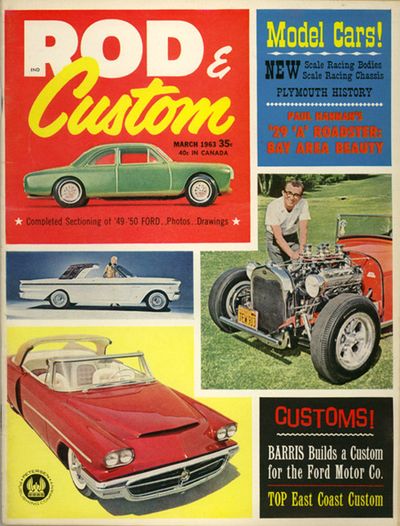 The Granada version of Chuck's Dodge was featured on the cover of Rod & Custom March 1963. 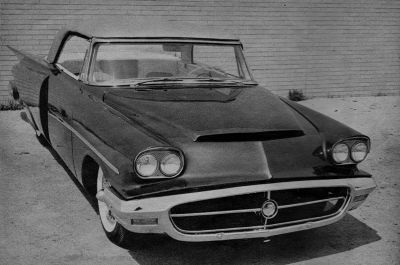 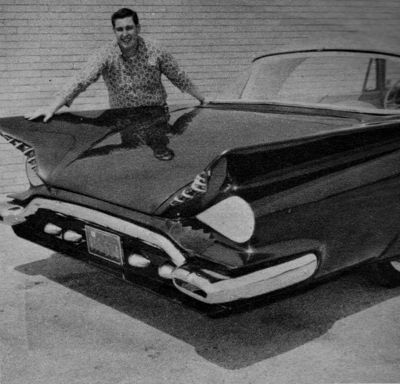 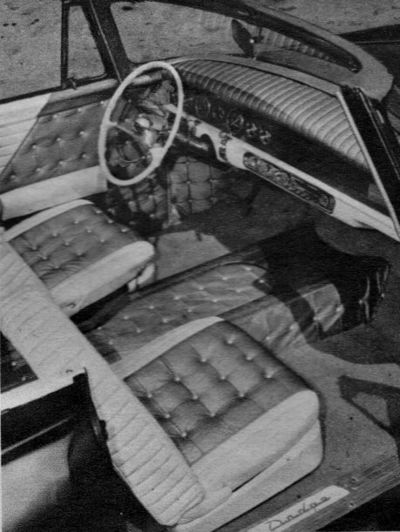 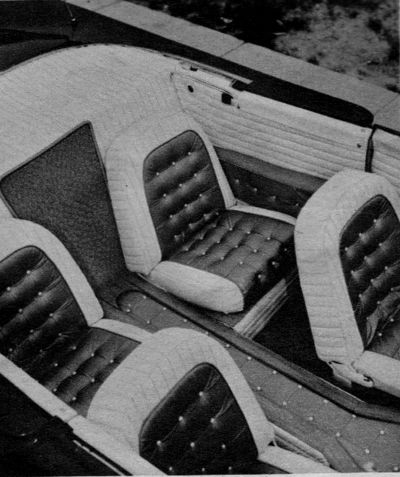 1956 Dodge Convertible owned by Chuck O'Malley of Cheltenham, Pennsylvania. The first version of the car was according to Custom Cars June 1959 restyled by George Corner. Later on the same year, a second version of the car was featured on the cover of Car Speed and Style November 1959, according to this story, the work on the first version was performed by Chuck working with the Carmer Custom Shop in Philadelphia. The first version featured a peaked hood, shaved handles and a continental kit. The airscoop on the hood was made functional, and was filled with mesh screen. Quad 1958 Studebaker headlights were installed and tunneled. The frenched grille shell featured a narrowed 1955 DeSoto floating grillebar, which was backed up by 1957 Chevrolet mesh screen. The front bumper was cleaned, and the rear bumper featured four exhaust outlets and a Chevrolet license guard. 1958 Packard taillights were installed in the extended rear fenders. Fred Wolfe upholstered the car with pleated black and white Naugahyde. Once completed, the body was painted black lacquer. The car was no slouch since it was powered by an enormous, dual quad 1958 Chrysler 300D. Fenderskirts were added to give it a lower appearance.[1] The first version of the car was shown at the 1958 Hot Rod & Custom Car World's Fair in West Springfield, Massachusetts. At the show, Chuck took home the first prize in the open conservative class. This version of the car was named "Mariette".[2]

Later on the same year, Chuck's Dodge appeared on the cover of Car Speed and Style November 1959. By then it had been painted a beautiful, irridescent Bahama blue and the black and white pleats had been replaced by an elaborate combination of blue button tufting and white pleats by upholsterer Fred B. Wolfe. Other notable changes included additional grille teeth, wire wheels, and teeth installed in the functional hood scoop. According to the story, Chuck himself was responsible for these modifications. This version was called the "Cheltenham Chariot"[3]

A photo from the Rik Hoving Custom Car Photo Collection dated April 1962, shows a third version of Chuck's Dodge. This version, named "The Granada", can be found on the cover of Rod & Custom March 1963 as well. By then Chuck had moved to Boslyn, Pennsylvania, and the car had been radically restyled and Thunderbirdified. The front had been fit with a 1960 Ford Thunderbird bumper/grille shell with a 1962 Chrysler 300 assembly. The front lip was molded to the bumper. The hood had been pancaked, and the 1958 Studebaker headlights were retained. Around back, the car had been extended 5 inches by grafting on a pair of 1959 Buick Electra fenders. 1960 DeSoto blinkers were used in the fins. A new rear bumper from a 1957 Ford Thunderbird had been added as well in order to upgrade the look of the rear end. The car had been repainted in a Candy Apple red, and once again, Fred Wolfe had been called upon for a beautiful stitch work. This version of the car featured Thunderbird bucket seats that were covered in gold button tufted and white pleated Naugahyde. The new interior featured a padded center console and a padded dash as well, along with Stewart Warner instruments and a Plymouth Fury steering wheel. A distinctive removable half-top finished off this great East Coast custom. The top was Veed in the center, and it featured a wrap-around rear window. When the car was featured in Rod & Custom March 1963, Chuck had won "People's Choice" at the Hartford Autorama with the Granada.[4]

Please get in touch with us at mail@kustomrama.com if you have additional information or photos to share about Chuck O'Malley's 1956 Dodge.