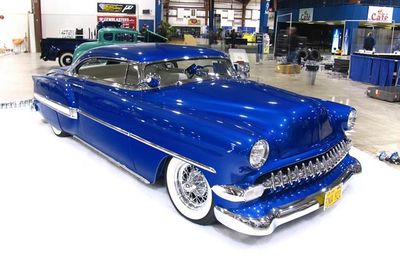 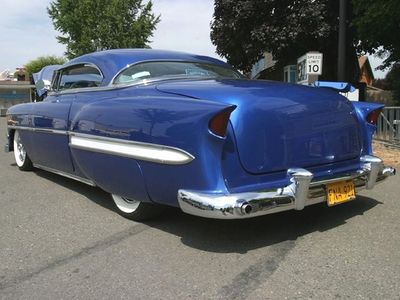 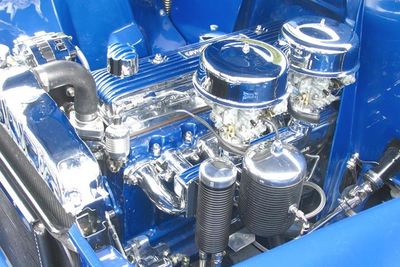 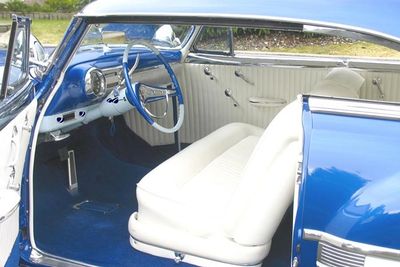 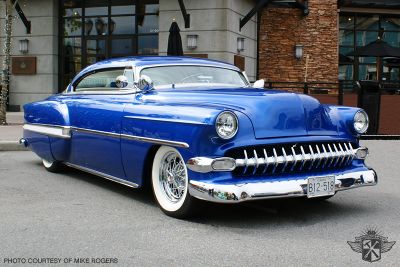 Graeme's Moonglow tribute at the Hot Rod Summers show at the Park Royal Shopping Centre in West Vancouver in 2010. Photo by Mike Rogers. 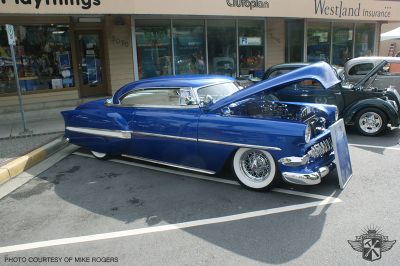 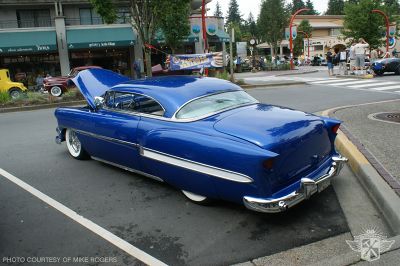 1954 Chevrolet Bel Air owned and built by Graeme Tait of North Vancouver, British Columbia, Canada. The car was built as a tribute to Duane Steck's 1954 Chevrolet The Moonglow. Graeme started the build with an impeccable accident free Southern California body without any traces of rust. A full body off restoration was completed with every bit of the car modified. The hood was shaved, and fully finished off underneath to show quality. The upper grille bar was frenched into the body and fit with 15 chromed teeth. Inverted 1956 Chrysler taillights were placed inside custom one piece handcrafted housings, just like Duane Steck did on his Chevrolet. Graeme's Chevrolet was upholstered in snow white Naugahyde with 1.5 inch rolls and pleats. Rolls and pleats were also used in the trunk. Bright royal blue carpets were used inside the car and in the trunk for a striking contrast.[1] furter

The car was powered by a rebuilt 216 cid Chevrolet inline six engine fit with dual Holley Weber 2 barrels carbs on an Offenhauser manifold and a Fenton split exhaust manifold. For smooth cruising, Graeme hooked the engine up with a new overdrive 700R transmission. The car was also fit with a Mustang II front end with Camaro disc brakes. A 1957 Chevrolet rear end with 3:70 gears were used in order to provide the best for both city and highway driving. Firestone Air Bag suspension were installed on all four corners, allowing correct cruising height and wicked dropped showing height. Vintage air conditioning and a stereo compatible with ipod's further modernize the driving experience.[1]

Please get in touch with us at mail@kustomrama.com if you have additional information or photos to share about Graeme Tait's 1954 Chevrolet.