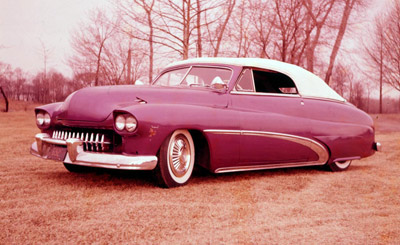 George Mizzi Jr.'s 1950 Mercury Convertible. Mizzi was a member of the Driving Deuces car club, and his Mercury was restyled at Monego's Body Shop. Named the "Purple Bug," the build was completed circa 1958 - 1959.

George Mizzi Jr. of Lyndhurts. Mizzi worked in a parts store all his life. Harry Bradley knew Mizzi well, and he told Ray Soff that Mizzi was a cool guy. "He was a little, short, heavy guy. Always had a cigar, and he looked like a used car salesman. In addition to the Mercury, he had a 1958 Chevrolet Corvette and a 1959 Cadillac Convertible." Every time Harry saw him, he had a new beautiful girlfriend that was taller than him. "George would take the grille out of the Corvette, and install it in the Mercury before he entered it in a car show. When the show was over, he put the grille back in the Corvette. He didn't want to spend the money buying an extra Corvette grille." After retiring, Mizzi moved to Florida.[1]

Please get in touch with us at mail@kustomrama.com if you have additional information or photos to share about George Mizzi Jr..