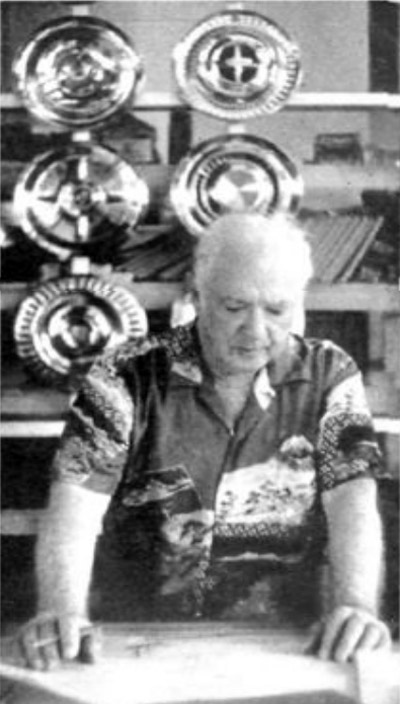 George Albert Lyon in his Bimini workshop in 1957.

George Albert Lyon (1882 - 1961) of Asbury Park, New Jersey is known as the inventor of early automobile bumpers and the man behind Lyon, Inc., a company manufacturing stainless steel wheel covers. By 1923 Lyon had just perfected his automobile bumper and was playing around with many more ideas. In 1929 he sold his company to the Houdaille-Hershey Corporation. After working in Asbury Park for a while, he returned to Detroit in 1930 and formed Lyon Incorporated. Lyon developed a metal tire cover for spare wheels, produced plastic and metal white walls, stainless wheel-trim rings and stainless steel wheel covers.[1]

On a fishing trip with four friends he had fallen in love with the island of Bimini. On the primitive island located near Bahamas, Lyon could sit for hours on a rock at Paradise Point working out problems of his inventions. As Lyon succeeded with his inventions, his dream grew in proportion. In 1935 George had earned enough money to buy the Paradise Point land on Bimini, and he built his first Bimini house there. As friends and associates came to Bimini to hang out with George, Casa de Lyon became too little, so in 1951 he built a million-dollar work and relaxation plant. The new house was equipped with a machine shop and laboratory where George could work and carry on experiments, flying in his Detroit engineers to Bimini in a Grumman Mallard plane for consulation.[2]

In 1957 Lyon was chairman of the board of his company Lyon, Inc. By the Lyon was the largest users of stainless steel in the world, using more then 30 million pounds in 1955. Lyon was 75 years old in 1957, and had retired himself for good several times. But being a productive inventor, he was often seized with another idea that brought him back into business bigger than ever.[2]

Please get in touch with us at mail@kustomrama.com if you have additional information or photos to share about George Albert Lyon.