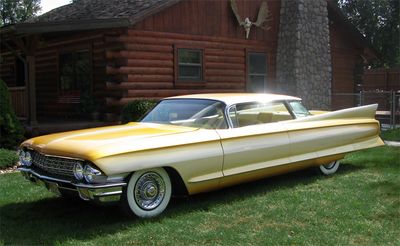 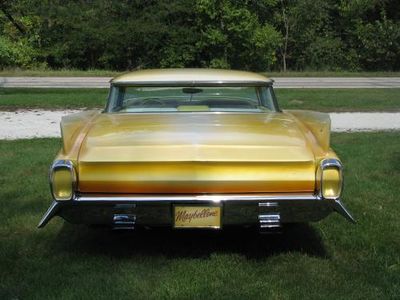 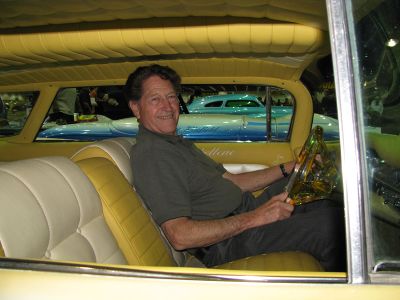 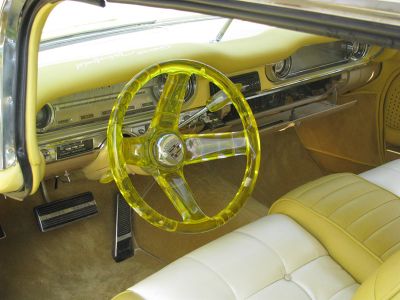 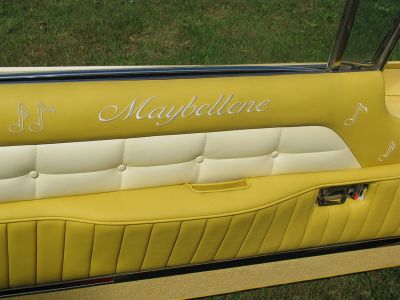 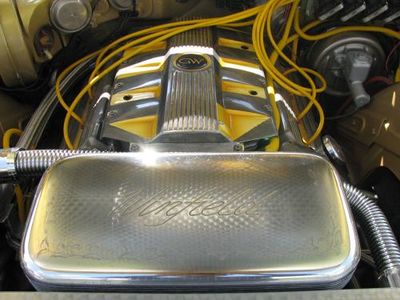 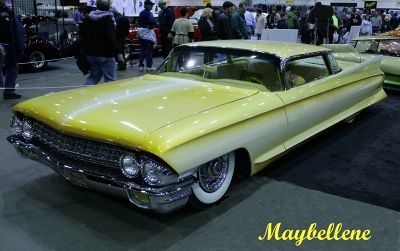 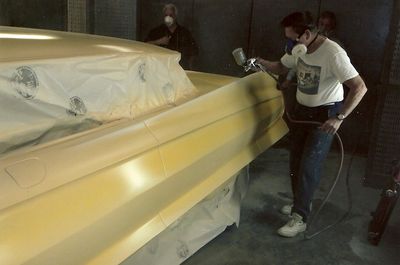 Gene Winfield repainting Maybellene after it was damaged at the 2010 Russo and Steele Scottsdale Auction. Photo by Richard Fuerholzer.[1] 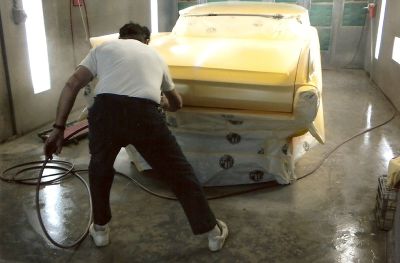 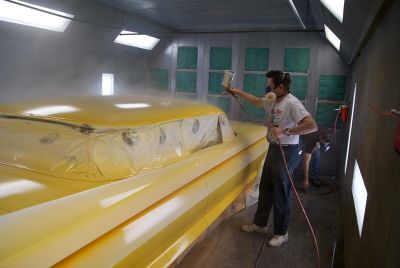 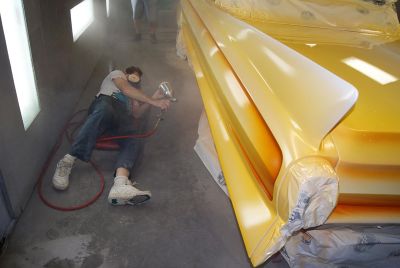 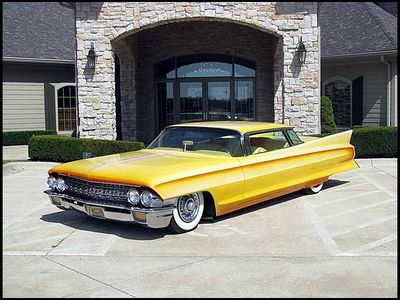 Maybellene as it sat after Gene Winfield redid the paint on the car.[2] 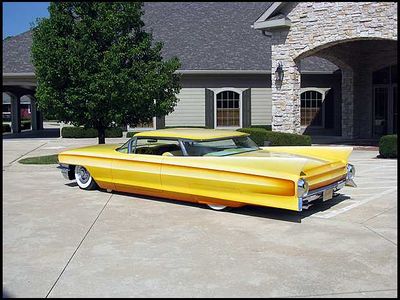 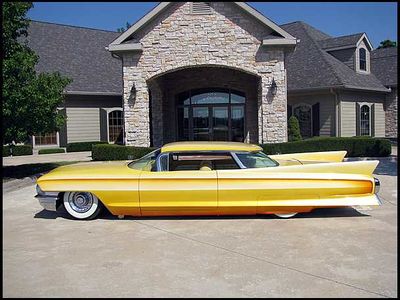 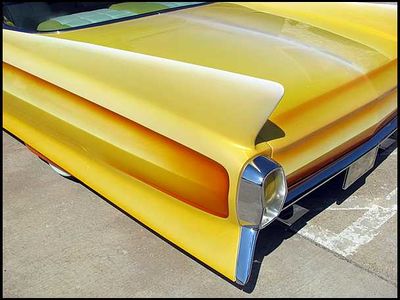 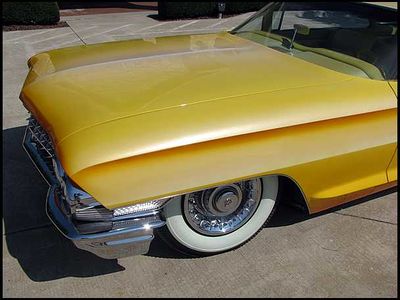 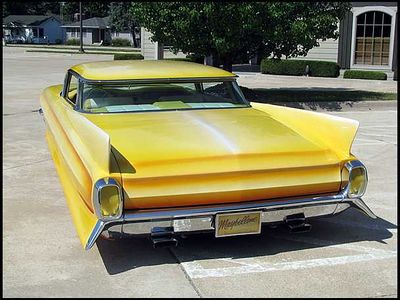 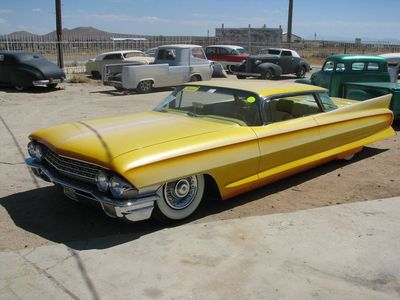 Maybellene back at Gene's shop in September 2010 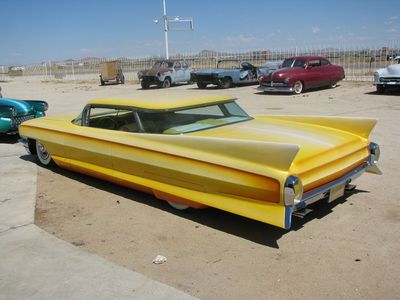 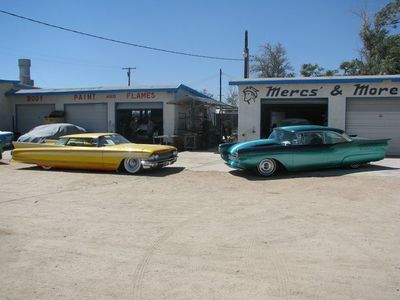 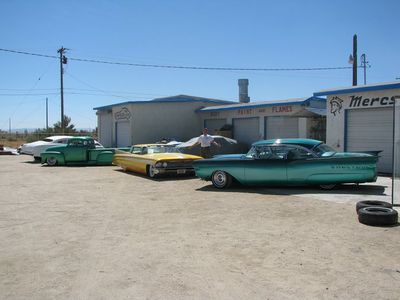 1961 Cadillac Coupe DeVille owned and restyled by Gene Winfield. Gene built the car in 1999. The car is named "Maybellene" after Chuck Berry's hit song, and was built to serve as Gene's personal drive-around custom. When Gene started to imagine Maybellene in his head he wanted something long and low, and his choice fell upon a 1961 Cadillac. To achieve the long low look Gene chopped of the stock roof and grafted on a sleeker 1960 Cadillac four door roof lowering the roofline 4 inches. He resculpted the body, smoothed out the lines, and extended and remolded the tailfins. Gene also added features like hidden pop-up door mounted rear view mirrors.[3]

Winfield built an air bag suspension that adjusted the ride height from street ride height to a dropped down ground-hugging ride. He labored over every detail even constructing a hand made golden translucent steering wheel with embedded 14kt gold flakes. A modern drive train powered by a Cadillac Northstar engine was installed, and Gene topped the build off with one of his signature “fadeaway” paint creations in shades of cream and butterscotch. [3]

January 20-24, 2010 Maybellene was supposed to be offered for sale at the 2010 Russo and Steele Scottsdale Auction in Scottsdale, Arizona.[3] By then the car was owned by Larry Tarantolo of Illinois. During the storm at the auction, a tent blew down and damaged the car, and Larry decided not to sell it after all. After the damages were repaired, Gene took a trip to Illinois in order to give the car a new paint job.[1]

August 14, 2010 the restored version of Maybellene was sold at the Mecum at Monterey auction in Monterey, California. The selling price was $31,000.[2] Quickly after the auction rumored spread that Gene Winfield was trying to buy his old car back.

Please get in touch with us at mail@kustomrama.com if you have additional information or photos to share about Gene Winfield's 1961 Cadillac.