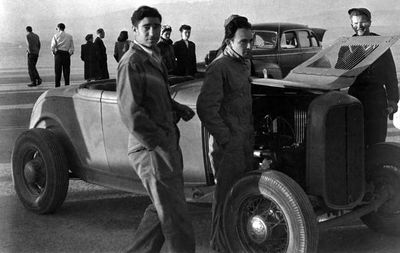 Fred with his roadster. Fred is the one in the foreground to the left.

1932 Ford Roadster owned and raced by Fred Lobello. Fred bought the roadster in July of 1941 for $65. He was 19 years old at the time, and had an urge for speed, so he removed the fenders and transformed into a highboy in 1942. He raced the roadster at the lakes between 1945 and 1948. It was powered by the original Model B 4-cylinder engine, and with a down draft manifold and a Winfield cam, Fred ran a respectable 96 MPH.[1] The engine received additional modification each year it was run, and by 1949 Lobello constantly ran his street-driven roadster at speeds over 90 mph. In 1949, Lobello pulled the engine and installed it in his freshly built belly tank streamliner.[2]

Please get in touch with us at mail@kustomrama.com if you have additional information or photos to share about Fred Lobello's 1932 Ford.