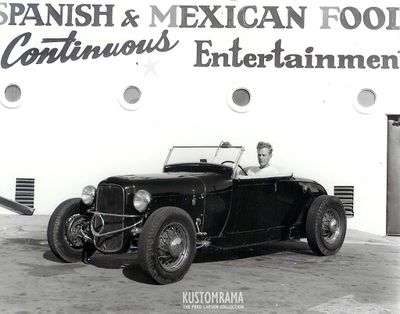 A photo of Fred in a street-friendly-version of his roadster. Photo from The Fred Larsen Photo Collection. 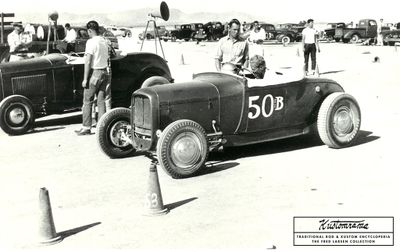 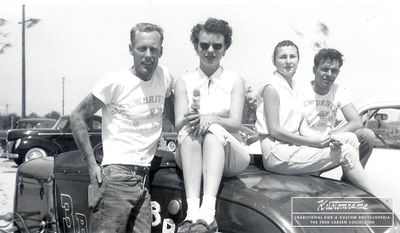 Fred and Marylou Larsen with Stella and Don Cummins during a 1954 Pomona Drags event. The gang are chilling on Fred's roadster. Photo from The Fred Larsen Photo Collection.

Fred built the car in 1948, while he was in the Navy. It featured a special frame that used the center of a 1932 Ford frame and kickups from a 1925 Chevrolet. The roadster was one of the first cars to use a belly pan and hydraulic brakes.[1]

Power came from a 296 cu in. 1948 Mercury V-8 engine that was hopped up with a Potvin cam and Navarro heads and manifold.[1]

Fred drove the roadster from California to Connecticut and then all over the eastern seaboard. He drove it back to California where he turned it into a lakes and drag-race car.[2]

After returning to Culver City, Larsen joined the Culver City Screwdrivers car club. As one of the clubs in the Rusetta Timing Association, it was responsible for setting up the racecourse on the lakebed. Fred and the other Screwdrivers would arrive at El Mirage at 7:30 a.m. to mark the course.[2]

The roadster ran 140 M.P.H. at El Mirage in 1951. The same year Fred pushed his metallic-green roadster to 141.73 mph in the B Roadsters class at Bonneville. This was Fred's first run on Bonneville.[1] Fred drove his car to the lakes, and in 2002 he told Dick Martin that switching to alcohol at the race was time-consuming and costly. In Hop Up January 1952 Fred told Hop Up that he liked the idea of a new class limited to gas, commenting that he spent $20 a week on alcohol, while gas was only a couple of bucks.[2]

In 1952 Ken installed a Hilborn Fuel Injector on the roadster, something that was new in those days. The same year he also learned about Nitro. The car turned 150 M.P.H. at the dry lakes, and 116 in the 1/4 mile drag racing.[1]

Nitro Banned at the Dry Lakes

Please get in touch with us at mail@kustomrama.com if you have additional information or photos to share about Fred Larsen's Second 1929 Ford.