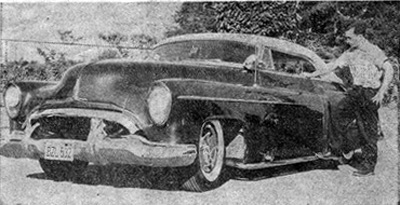 1953 Oldsmobile convertible owned by Frank Marini of Santa Clara, California. A photo of Frank's Oldsmobile was printed in a story about custom cars in the August 19, 1957 issue of the San Jose News. By then the car had been fit with a chopped Carson Top according to the story. The door handles were shaved, and a door button was installed at the rocker panel, above the chromed side exhaust pipe. The story claimed that Frank's olds was a 1950 Oldsmobile.[1]

Please get in touch with us at mail@kustomrama.com if you have additional information or photos to share about Frank Marini's 1953 Oldsmobile.