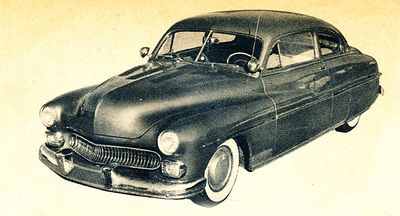 As it appeared in Car Craft December 1955. Photo by Ralph Poole. 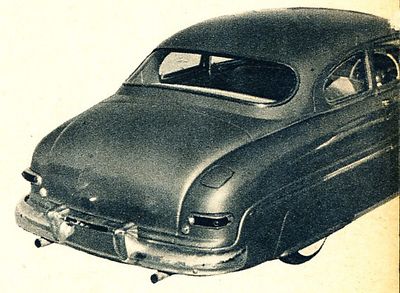 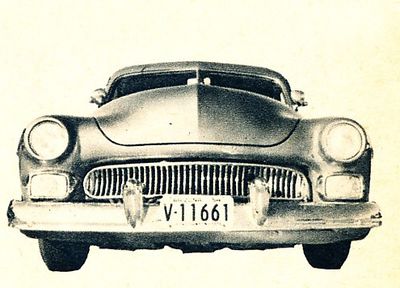 1950 Mercury owned by Ermie Immerso of Arizona. Ernie's semi custom featured a neat homemade grille, made out of flat metal stock and tubing. 11 feet of tubing was bent to form the outside ring of the grille, while 44 feet of 1/8" x 1 1/2" flat steel was used to make the convexed ribs. The ribs were actually formed over an old Ford timing gear, welded to the outer tubing frame and then the whole assembly was chromed. The grille shell was naturally molded to the inner panels. Extra large parking lights were made from two halves of 1950 Mercury parking lights, which were reshaped to match, then spliced together. The hood trim was given the deep six, and a sleek peak was made instead, running the length of the hood. All four hood corners were rounded as well, and four rows of louvers were punched to the hood. In the rear, the deck lid was shaved. The rear frame was stepped 4 1/2", and the rear springs were de-arched. Up front the A-arms were coupled with Valley Custom Shop lowering kit.[1]

Please get in touch with us at mail@kustomrama.com if you have additional information or photos to share about Ermie Immerso's 1950 Mercury.