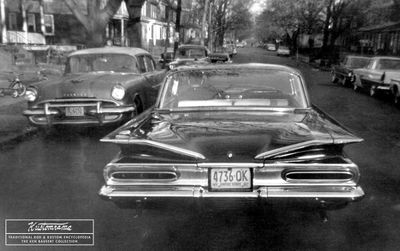 1960 Chevrolet Impala owned by Eddie Buckston of Richmond Hill, New York . "I went through grammar school with Eddie's younger brother, Pete," Ken Bausert told Sondre Kvipt of Kustomrama in 2017. "By the time we got into high school, the Buckston house was a meeting place for a lot of Eddie's friends who were starting to get into cars, so I hung out there a lot. Those were some of the guys I would hop in a car with and ride around and hope that I'd get home for bed before my father thought it was too late." Painted black, Eddie's Impala had been fitted with 1959 Pontiac Bonneville taillights.[1]

Ken remembers another story about Eddie's Impala; "When Eddie ran the car at Westhampton Drag Strip, the clutch blew up and most of the pieces came straight up through the cowl in front of the windshield. That's why certain classes at the strip require a "scatter-shield.""[1]

Please get in touch with us at mail@kustomrama.com if you have additional information or photos to share about Eddie Buckston’s 1960 Chevrolet.