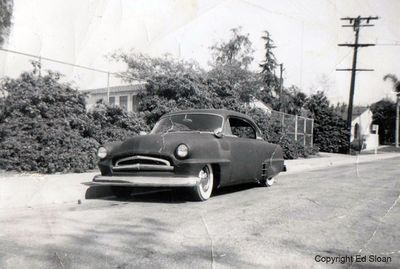 The Plymouth as it looked before Ed had Barris Kustoms chop the top. Photo by Ed Sloan, provided by Mikey Lehmann. 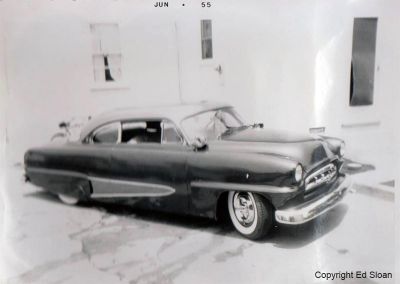 The Plymouth as it appeared by June 1955. Photo by Ed Sloan, provided by Mikey Lehmann. 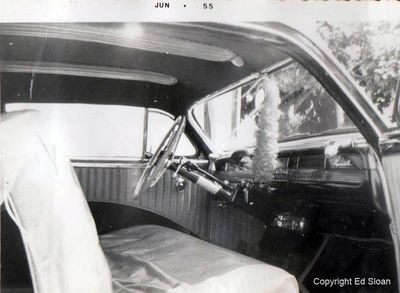 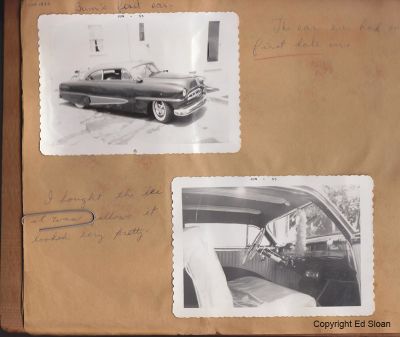 A page from Ed's own album. Photo by Mikey Lehmann. 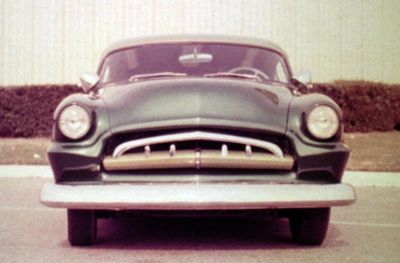 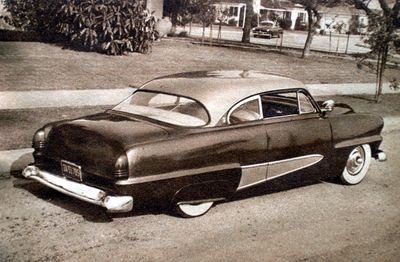 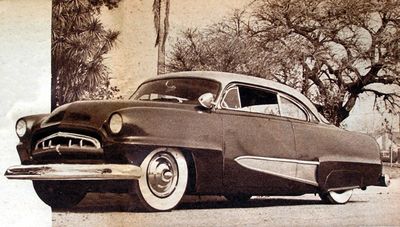 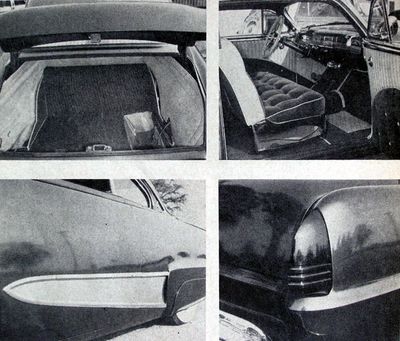 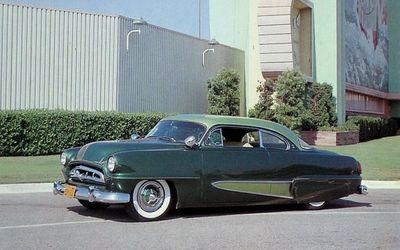 At the Compton Drive-In. By now the car has been pinstriped and fit with bumper guards up front. Ed has also installed new hubcaps. Photo by George Barris

1953 Plymouth Cranbrook Belvedere hardtop coupe restyled by Barris Kustoms for Ed Sloan around 1953/1954. Ed bought the car brand new as he needed a daily driver when he started high school. At age seventeen, he took the car to Barris Kustoms for a full custom treatment. Early sources claims that Barris Kustoms chopped the top 3,5 inches in the front, and 5 in the back. Car Craft February 1958 on the other hand claims that the top was chopped 4 inches up front, and 6 inches in the rear. A new rear windshield was handformed out of plexiglass. A new grille was made using Ford components. Barris took two 1953 Ford center bars, two 1949 Ford top bars, and combined them with grille teeth from a 1953 Ford pickup. The headlights were frenched using 1951 Mercury rings, and the bumpers were smoothed. Dual exhaust was routed trough a 1954 Plymouth rear bumper, and small casters were installed beneath the rear bumper. The door handles were removed and the hood and trunk were shaved. The hood was also peaked. The original taillights were replaced by 1953 Lincoln taillights. Appleton spotlights and hand made fender skirts were added to the car. The rear fenders were reshaped and fit with functional air scoops. The side trim was made from 1953 Chevrolet components. To get the right stance, Barris lowered the car 3.5 inches in the front and 6 inches in the rear. The car was upholstered by Carson Top Shop, who made a pleated light green leatherette and dark green mohair interior for the car.[1] Pushbuttons were installed inside to open the trunk and doors. Once the bodywork was completed, the car was painted Dark Green Metallic-and-Lime Mist. The engine was kept stock and was not hopped up in any way, the transmission was the standard 3-speed unit. After the restyling, Ed's Plymouth was now known as the "Pioneering Plymouth".

By 1958 the car had been pinstriped. New fender skirts and hubcaps had been installed, and the car had been fit with bumper guards up front. In 1961 Ed sold the car. Having kids, the car turned out to be impractical. The car was sold to a fellow in East Los Angeles, California. According to Ed the new owner didn't take very good care of the car, and the car got pretty worn out while he owned it.[2]

Unfortunately, the new owner was shot and killed outside his house just a year after he purchased the car. The car has been missing since the 1960's, but rumors has it that it is still around, probably somewhere around in California.[3]

Please get in touch with us at mail@kustomrama.com if you have additional information or photos to share about Ed Sloan's 1953 Plymouth.