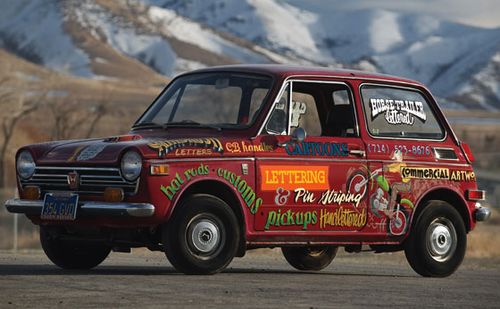 By the early 1960s, very few “car crazy” teenagers in the world had not yet heard the name of Ed “Big Daddy” Roth. A larger-than-life character whose cars dazzled onlookers with wild lines, colors, and chrome, Roth was as much an artist and self-sufficient marketing expert as a hot rodder.

Although Roth loved typical rods, he also liked the unusual in his personal everyday cars. He fell in love with the new Kaiser Henry J, but soon removed the “hump” from the grille. After his discharge from the Air Force, Roth could not keep up with the payment schedule, so he bought a 1948 Ford sedan. Soon, it was embellished with signage advertising his painting skills in pin striping, flames, scalloping, and a multitude of other custom techniques. This rolling advertising became an integral part of Roth’s way of life, and was continued on the various vehicles he owned and drove over the succeeding years.

In 1970, Roth purchased a new red Honda 600 Coupe, to which he quickly applied a myriad of slogans and advertisements to promote his considerable portfolio of skills. The tiny Coupe performed yeoman duty over the next few years before being replaced by a series of Honda Civics, and it most certainly was a unique sight, with a man of Roth’s physical stature behind the wheel weaving through California’s increasingly congested traffic. As well as being used as a rolling advertisement, the diminutive Honda was frequently pressed into service hauling Roth’s numerous VW trike bodies and their associated components.

Time has taken its toll on the lower rocker panels of the Honda, which do call for repairs, but this in no way will interfere with the original Roth-applied signage and lettering. Inside, the interior is complete, and some areas may require renewal. The Honda’s 600 cc two-cylinder engine runs well, and little is required with the exception of some minor mechanical servicing to return the Honda to cruise and show duty. As a rarely seen “microcar” in its own right and an example of Japan’s growing stature in automotive exports, this small slice of Americana with Roth’s personal touches will certainly continue to draw crowds wherever it goes.[1]

Please get in touch with us at mail@kustomrama.com if you have additional information or photos to share about Ed Roth's 1973 Honda.