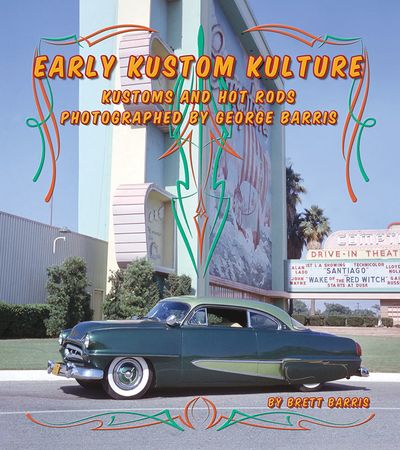 George Barris is indisputably the "King of the Kustomizers," the most phenomenal kustom car builder ever. This book collects the incredible photos of early hot rods and custom cars taken by George Barris in the 1950s to early '60s. As a sculptor of cars, George Barris knew well the angles and lighting that would bring out the beauty of these creations, both his own and those of others.

A treasury of images, the photographs in this volume capture the early parts of the kustom culture movement, when people wanted to stylize their cars and make them look more sleek, different, powerful, and personal. Early Hot Rod and Kustom Kulture feature hundreds of photos including notable customizers from all over the country, in addition to Barris' own creations. Many of these unique photographs have never been seen before. Barris also photographed the people and personalities of this iconic time, capturing builders and owners, as well as pinups and models. George captured all the styles of the early era of customs and hot rods, both East Coast and West Coast, reflecting the wide range of trends and scenes. A beautiful collection seen through the lens of master customizer George Barris.

George Barris began making custom cars in the early 1940s with his brother Sam. George bought a German-made twin lens reflex Rolleiflex camera and began photographing cars as a way to promote his business. It then became a way to educate other kustomizers. George recorded and wrote how-to stories offering information and photos on kustomizing techniques, sharing his work as well as that of other builders from all over the country. George captured thousands upon thousands of moments in time when the beauty, style, or sheer outrageousness of an automobile was visible only to a gathered crowd.

George Barris’ artful documentation of early car culture serves as an important chronicle of custom car history, capturing the best the best of burgeoning hot rod and kustom kulture. His first work to appear in print was virtually concurrent with the beginning of auto enthusiast magazines known as “little pages” such as Hot Rod, Car Craft, Custom Cars, Hop up, Rod & Custom, Motor Life, Spotlite, and others. Although much of his fame surrounds the incredible kustom cars he built, George’s endeavors as a photographer are just as important as any other facet of his life.

Please get in touch with us at mail@kustomrama.com if you have additional information or photos to share about Early Kustom Kulture: Kustoms and Hot Rods Photographed by George Barris.