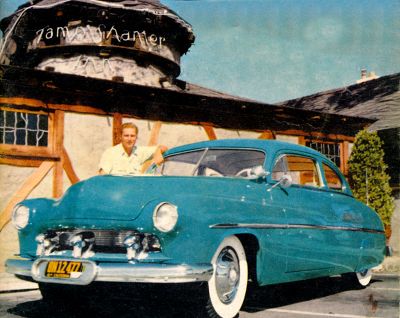 Don's Merc as it appeared on the cover of Car Craft January 1954. Photo by Felix Zelenka. 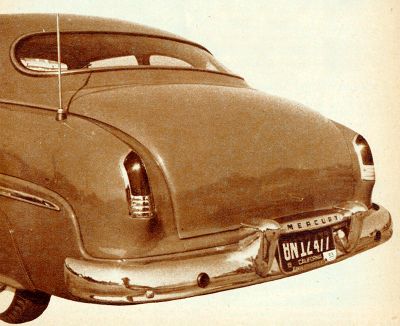 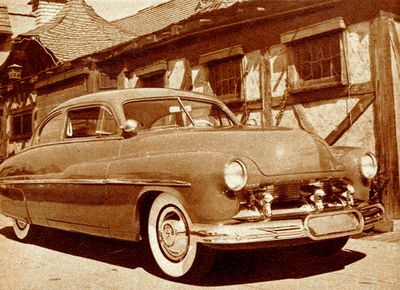 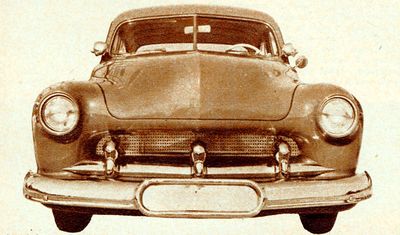 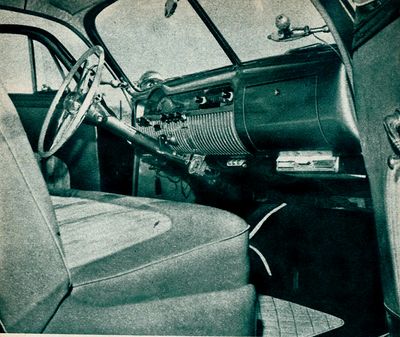 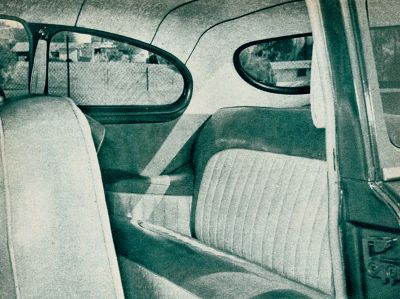 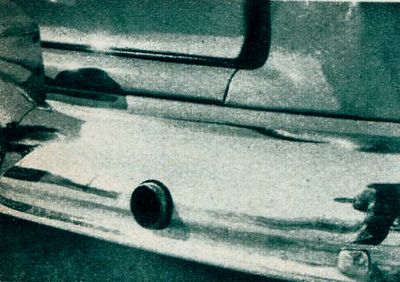 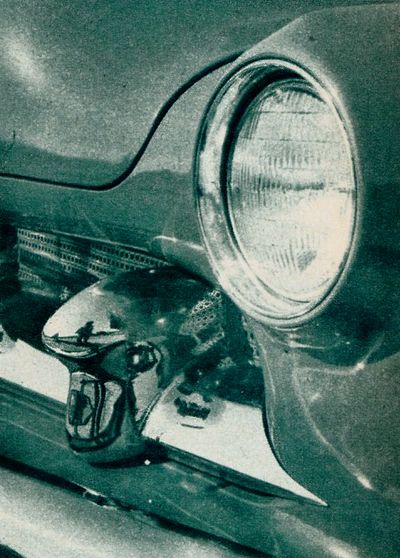 1950 Mercury restyled by Bill Babb's Custom Shop of Glendale for Don Pulford of Burbank, California. It all began when Don and his son were hasseling over a car to restyle that would fit them both. It ended up with Don going to the nearest Mercury dealer purchasing a brand new two-door sedan, with the purpose of having it customized. Bill Babb's Custom Shop was chosen for the job. The hood was nosed and had its corners rounded, and the headlights were frenched with a slightly tunneled effect. The top of the front fenders were slightly peaked as well, to harmonize with the hood. The stock grille was discarded and a new one was made, consisting of three 1950 Cadillac front bumper guards mounted on a bar made from scrap material with the ends contoured to fit the lower fender panels. The grille was backed up with a mesh screen. The stock front bumper was fit with a custom made center made from cold rolled tubing and sheet metal which were welded on to the bumper and chromed. The deck lid was shaved for chrome, and the stock taillights were replaced by 1949 Buick units, which fit well with the contours of the Merc's fenders. The radio antenna was from a 1953 Packard, and it worked automatically. The exhaust was routed through the rear bumper. Dual spotlights and fender skirts were added. Once the bodywork was complete, it was painted Marine Turquoise Blue.[1]

L & L Upholstery Shop of Glendale redid the whole interior, from floor rugs to the headliner. Seats and side panels were done in saddle tan and speckled white rolls and pleats. A small chromed plate below the dash contained all the solenoid push buttons that operated the doors, hood and trunk. The engine was equipped with a 3/4 Harman & Collins cam, Navarro heads, Edelbrock four throat manifold, 1952 Buick carb and Mallory ignition. The build took two years, and it was completed in 1952. Don managed the Chuck Wagon restaurant in Burbank, and in his position he received bonus checks from time to time. They were the monetary source for all the customizing, and at the end of the two years of construction time, his personal pocketbook was untouched. When Don's Merc was featured in Car Craft January 1954, he had plans of letting So-Cal Speed Shop build him a full race engine.[1]

Please get in touch with us at mail@kustomrama.com if you have additional information or photos to share about Don Pulford's 1950 Mercury.