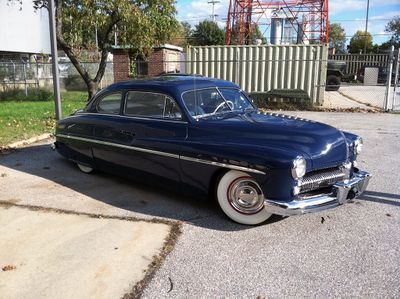 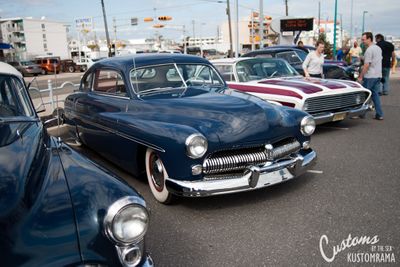 Dave's Mercury at the 2014 Customs by the Sea in Wildwood, New Jersey. Photo by Sondre Kvipt - Kustomrama. 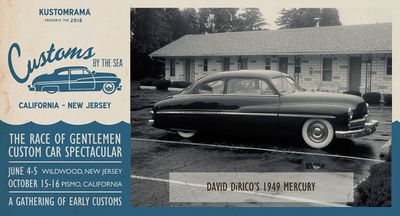 Dave's Mercury was one of the Featured Registrations for the 3rd annual Customs by the Sea in Wildwood, New Jersey. 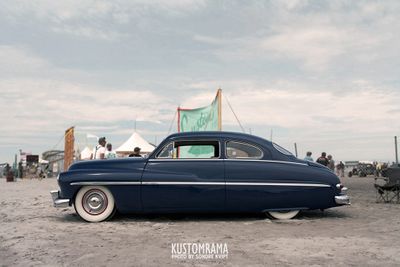 David's Mercury at the 2016 Customs by the Sea in Wildwood, New Jersey. Photo by Sondre Kvipt - Kustomrama.

1949 Mercury owned by David DiRico of Philadelphia, Pennsylvania. In 2008 David told Luke Karosi of Kustoms Illustrated magazine that he always liked the early Barris customs, and that he felt that a Mercury just needed to be cleaned up because it already has great lines. He located the Mercury in in a garage in Philadelphia. It had been sitting for quite some time when he bought it.[1]

Wanting a mild custom, the Merc was nosed, decked and shaved for door handles. David kept the stock factory sidetrim, but he replaced the front fender trim with reversed and shortened quarter panel trim before the body was painted a factory Washington Blue. The body and paint work on David's Mercury was performed by Richard Glymph of Columbia, Maryland. It was lowered 5" in the front and 7" in the rear before David dressed it up with a set of Lincoln hubcaps, red rims and Goodyear whitewall tires. Inside, the car received a traditional blue and cream rolls and pleats upholstery by Norman Haug of Classic Auto Upholstery in Turnersville, New Jersey. The door panel trim was hand-made and chrome plated, and a Mercury accessory steering wheel was installed. Power came from a warmed up 255 ci. flathead engine that was punched out .030 over. The engine was also hopped up featuring an Isky cam, Edelbrock heads and intake and two Stromberg 97s.[1]

The build took four years. In 2007 it received the Kustoms Illustrated Editor's Pick at the 2007 Lead East.[1]

Please get in touch with us at mail@kustomrama.com if you have additional information or photos to share about David DiRico's 1949 Mercury.