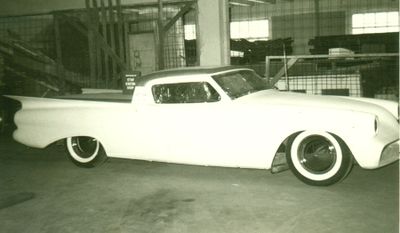 1953 Studebaker Pickup owned and restyled by Dave Stuckey, of Stuckey Kustom in Wichita, Kansas. The car was Dave's personal driver, and he built it in 1958. Dave's pickup featured a chopped and shortened top. The front bumper was removed, and Dave fabricated a new grille opening. The reworked grille opening retained the stock lower pan. The headlights were frenched and modified, and the rear of the car was fit with a 1959 Chevrolet El Camino bed. Power came from a Buick motor with three 2's. He drove the pickup until 1960. In 2013 Dave told Larry Wolfe that he didn't like something about the car, so he told someone he would cut it up. They told him he wouldn't do it, so he went ahead and did it.[1]

Please get in touch with us at mail@kustomrama.com if you have additional information or photos to share about Dave Stuckey's 1953 Studebaker.