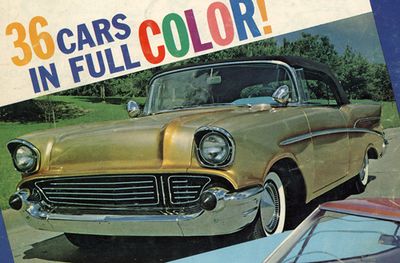 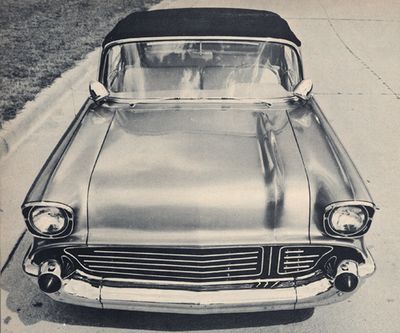 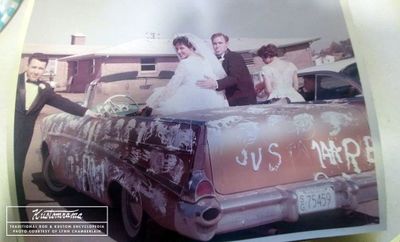 Lynn Chamberlain bought the car off a used car lot in Wichita, Kansas in the early 1960s. He used the car as transportation in his wedding, decorating it with shaving cream. Unfortunately, the shaving cream ate into the lacquer and ruined it, so Lynn traded it in on a 1964 Plymouth Barracuda. Photo courtesy of Lynn Chamberlain, provided by Lee Chamberlain.

1957 Chevrolet Convertible owned and restyled by Dave Puhl of Wichita, Kansas. Dave worked as the foreman at Star Kustom Shop when he built the car. He removed one of the peaks on the hood of the car. The other one was extended the full length of the hood. An off-center grille was constructed in order to match the peak. The grille was handformed from 3/8 inch steel bars that were chrome plated. Dave filled and electrified the rear deck. Flat lucite plastic was used in the taillights. The exhaust was routed through the rear bumper. This version of the car was featured in Popular Customs Winter Issue 1963, where asymmetrical styling was described as one of the hottest trends at the time.[1]

Dave later sold the car and in the early 1960s it was owned by Lynn Chamberlain of Wichita, Kansas. In 2019 Lynn's brother, Lee Chamberlain, told Sondre Kvipt of Kustomrama that his brother bought it off a used car lot in Wichita. Lynn used the car as transportation in his wedding, decorating it with shaving cream. Unfortunately, "the shaving cream ate into the lacquer custom paint and ruined it," so Lynn traded it in on a 1964 Plymouth Barracuda.[2]

Please get in touch with us at mail@kustomrama.com if you have additional information or photos to share about Dave Puhl's 1957 Chevrolet.