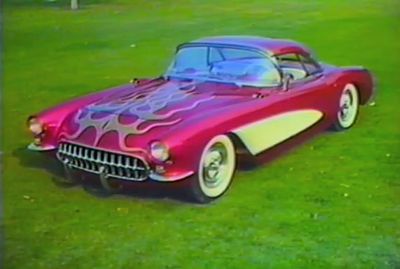 Darol's Corvette as it looked when it was featured in Car Speed and Style June 1958. 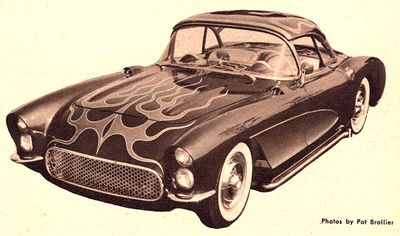 The second and more radical version of the car. This version was featured in Car Craft January 1959. 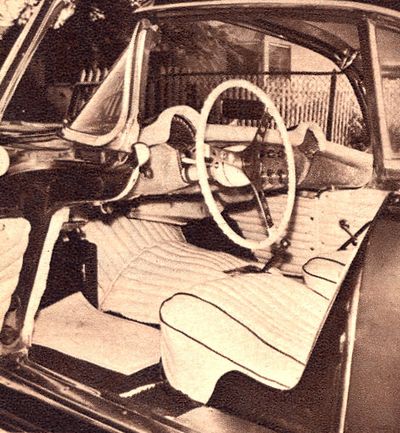 1957 Chevrolet Corvette owned and restyled Long Beach Renegades member Darol Jorgenson of South Gate, California. The first mild version of Darol's Corvette featured a Candy Apple Red paint by Darol himself. After applying the paint, he took it to Larry Watson of Watson's House of Style in 1957. Larry flamed the car for Darol in pearl gold powder, the same color as Darol had used as under base. The flames were pinstriped in white. The face panels on the dashboard and the hubcaps behind the flipper bars were done in glitter. By doing this, Larry and Darol started a new trend. This version of the car was featured in Car Speed and Style June 1958.[1] Later on, Darol extended the front fenders in order to provide shades for vertically-mounted 1958 Ford quad headlights, and the stock scoops on the front fenders were dressed up with trim teeth. The grille was removed and replaced by a mesh grille screen from a 1958 Ford. In the rear, 1955 Oldsmobile taillights were frenched into the fenders and Buick portholes were mounted in the lower edge of the rear fenders to accomondate back-up lights. The roof was restyled, following the latest trends by installing a 1958 Chevrolet Impala roof scoop. Fiberglass was used for all modifications. A pleat and roll interior in white Naugahyde with red beading was done by Darol's mother. Floor rugs were done in contrasting red with white trim. Darol decided to put 1955 Dodge Lancers hubcaps on the Corvette.[2] After restyling the car again, Darol painted it Candy Apple Red over gold powder again, and he also had Larry Watson duplicate the flames. This was done in 1958, and the second version did also feature flames on the roof.[1]

Please get in touch with us at mail@kustomrama.com if you have additional information or photos to share about Darol Jorgenson's 1957 Chevrolet.