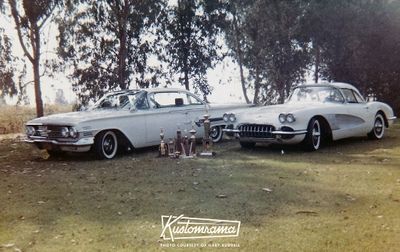 A photo of Danny's Impala next to Gary Ruddell's 1958 Chevrolet Corvette. The photo was taken in 1960. Photo courtesy of Gary Ruddell. 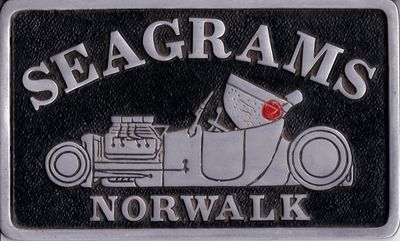 Danny was one of the original members of the Seagrams, and it was he who designed the plaque for the club. Photo courtesy of Gary Ruddell.

1960 Chevrolet Impala owned by Seagrams of Norwalk car club member Danny Leonette of Norwalk, California. In 2018 ex-Seagrams President Gary Ruddell told Sondre Kvipt of Kustomrama that Danny bought the Impala brand new. "It had a 348 cui V-8 with a 4-barrel and a manual 4-speed gearbox. He dropped it in the front and back and added Appleton spotlights. Danny was one of the original members of the Seagrams Car Club. He designed our club plaque and was a member until 1963."[1]

One afternoon Danny and Gary were trying to think of something to do, and one of them came up with the idea of going on a trip in his Impala. "There was only one problem," Gary told Sondre. "I didn’t have any money. I wasn’t working but I was collecting unemployment checks. So, we decided we would wait until I collected my check, then I would pay a couple of bills and we would pool our money for the trip. It was about $50.00 total. Back then gas was about .20 cents a gallon and the same for a hamburger, so we had enough to last for a while."[1]

"The plan was not to have a plan. We would go where we wanted to go and stay where we wanted to stay. When the money ran out we would come home. I picked up my unemployment check, and we loaded up the Impala with our sleeping bags and a couple of changes of clothes. It was time to get out of Norwalk, so we headed north up the California coast. We took turns driving and went anywhere that looked interesting. At night we would pull over and sleep in the car. Some of the places we went to on our trip were Santa Barbara, Big Sur, Carmel, The Redwood Forest, San Francisco, Sacramento and Mt Shasta in northern California. We continued on into Oregon and finally ended up at Crater Lake. By this time we had been living in the Impala for about a week, and we were running low on money and have not had a shower since we left. We were also starting to miss our girlfriends, so we decided it was time to head home."[1]

In 2018 Gary wished that the trip had lasted longer. "This was one of the best trips I have ever taken. I think it must have sparked something in Danny because not long after we came home, he sold the Impala and left Norwalk for good. He did a lot of travelling and finally ended up in Sweden. He is now a very successful artist and teaches special techniques in pottery."[1]

Please get in touch with us at mail@kustomrama.com if you have additional information or photos to share about Danny Leonette's 1960 Chevrolet.