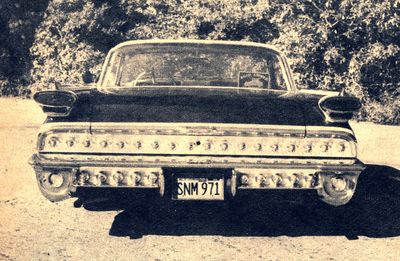 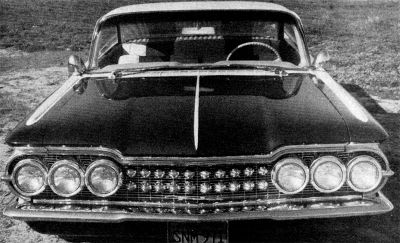 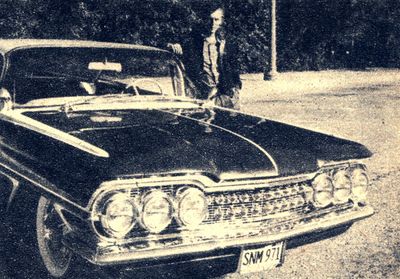 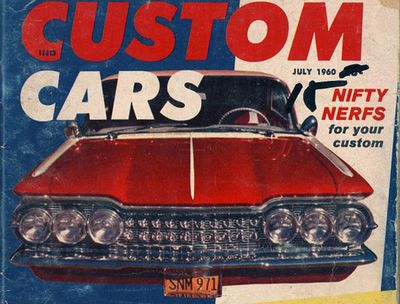 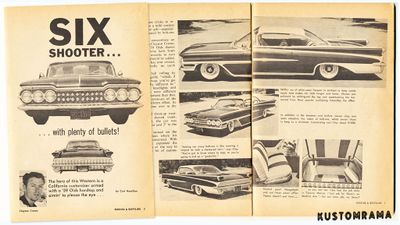 Clayton's Olds was featured in Rodding and Re-styling August 1960.

1959 Oldsmobile owned by La Crescenta Road Angel member Clayton Crowe of Sunland, California.[1] Clayton bought the car brand new[2], and immediately took it to Karl Krumme of Kustoms Inc for a restyling. Six Oldsmobile headlights were installed up front along with a bullet grille kit. The door handles and all chrome trim was removed to achieve a sleek appearance. Dual spotlights were installed, and the car was lowered and fit with Dodge Lancer hubcaps for further appeal. The nice color scheme consisted of Candy Red over Pearl along with pearl scallops. The car took about a year to finish up, and John Williamson, who lived a few blocks down from Clayton, remembers when the Olds showed up in town after it had been restyled. The car was a sensation, and everybody started buying bullets and adding them to their cars. It was quite low for the time and the Candy Red over the pearl white was very new too. Clayton lived on a dead end street called Wyngate and kept the car in the garage most of the time, but would bring it out on weekends. The kids would go by to see if he had it out to get a quick look at it but most of the time it would be seen cruising up and down the Blvd.[2]

Previous to the Oldsmobile, Clayton had a very nice baby blue 1934 Ford 3-Window Coupe with a built 3/8 x 3/8 flathead that he had bought from its original builder Russell Vaudman.[2]

Please get in touch with us at mail@kustomrama.com if you have additional information or photos to share about Clayton Crowe's 1959 Oldsmobile.