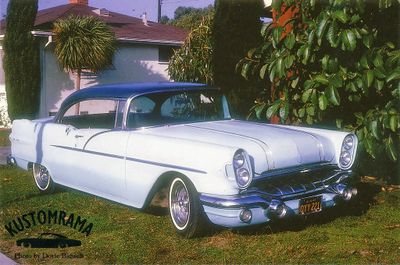 Carl's Pontiac as it appeared in 1965 Photo by Doyle Bidwell, courtesy of Howard Gribble. 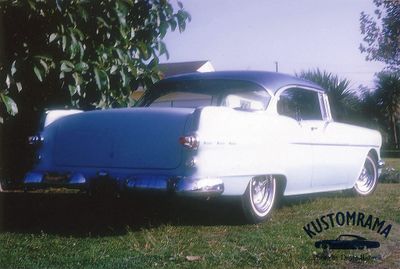 1956 Pontiac 2-door hardtop owned and restyled by Carl Darling of Torrance, California. The front fenders on Carl's Pontiac were massaged to house canted quad headlights. Scoops were also cut into each of the fenders, next to the headlights. Further front end modifications included a shaved and rounded hood. The bottom part of the front bumper was painted in the same color as the car, and the front bumper guards were cut down for a cleaner look. The body sides were also shaved for emblems. The passenger side featured two sunken antennas behind the door. The deck lid was shaved for ornamentation as well, and taillights from a 1961 Mercury were installed. The rear bumper overrider was removed for a split bumper effect. Once the bodywork was done, Carl gave the car a two tone blue fadeaway paint job. Pinstriping was added to spice it all up. The wheels appeared to be painted a light purple with chrome outer rings. Small center caps with three bladed knockoff were attached to the wheel. Howard Gribble remembers that Carl had the Pontiac looking like this in 1965, when he was restyling his 1961 Ford Starliner. At the time Carl and a friend ran a custom body shop in a one car garage that they rented. They still had their day jobs, and worked in the shop after hours and in the weekends. The shop lasted only for a couple of months.[1]

Please get in touch with us at mail@kustomrama.com if you have additional information or photos to share about Carl Darling's 1956 Pontiac.