Buddy's Plymouth as it appeared in 1961. Photo by Ron Taylor. 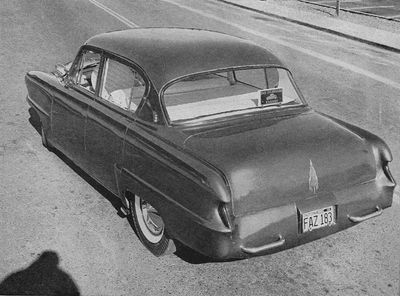 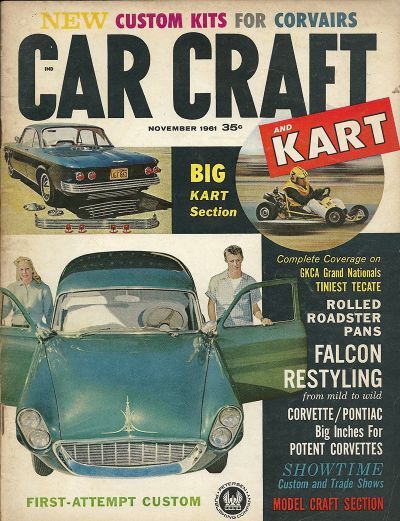 Buddy's Plymouth on the cover of Car Craft November 1961. 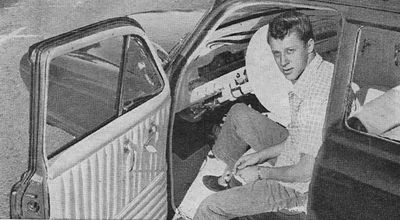 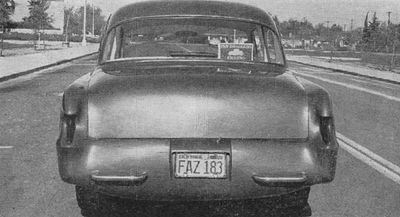 1953 Plymouth 4-door Sedan restyled by Jess Sandoval of Renewal Body Shop in Clovis for Fresno Pan Draggers member Buddy Katlik, of Fresno, California. Buddy's ideas were relayed to Don Wallace, who proceeded to design the car for him, before Jess at Renewal Body Shop did the major modifications. The car was nosed, decked, and shaved for door handles. The doors were electrically operated, and the window trim was shaved as well. The rear end was a chapter for it self, the bumper was removed, and a rolled pan was made, fit with nerf bars and a custom license plate surround. The rear fenders were extended and fit with 1960 Chrysler taillights, which were split and frenched to the fenders. The front was quite massaged to, with the bumper removed and replaced by a rolled pan that housed a 1960 Chrysler grille. The hood had to be sloped forward to blend with the new grille. 1959 Chevrolet headlights were installed and canted slightly inward. The trim on the fenders were removed, and scoops were made in the round profiles on each side of the front fenders, fit with radio aerials. The car was lowered 2 inches in the rear by installing lowering blocks, and 4 inches up front by cutting the coils. Once the bodywork was done, the car was painted Pine Ridge Green with pinstriping. The interior was done in white tuck & roll Naugahyde. The dash and inner door handles were fitted with custom plastic knobs. The engine was stock, but when Buddy was featured in Car Craft November 1961, he was planning on installing a V8 as soon as possible.[1]

Please get in touch with us at mail@kustomrama.com if you have additional information or photos to share about Buddy Katlik's 1953 Plymouth.