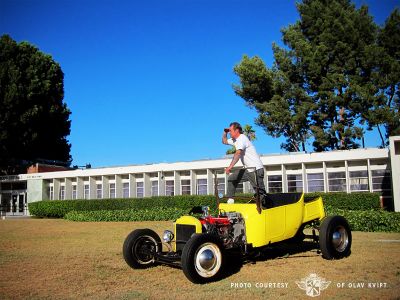 Brad Masterson at the Lynwood City Hall with his Shit-T. Photo by Olav Kvipt. 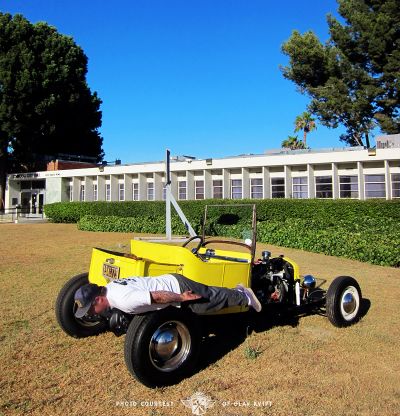 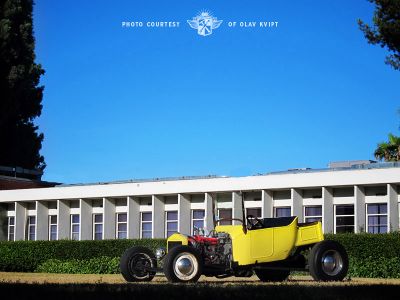 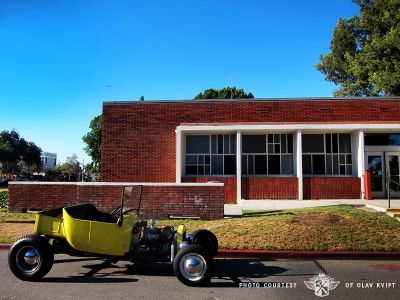 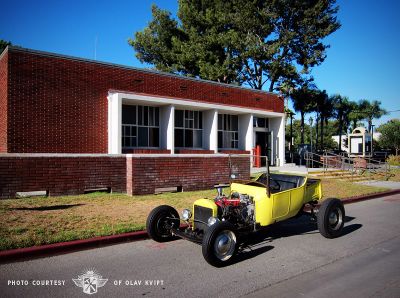 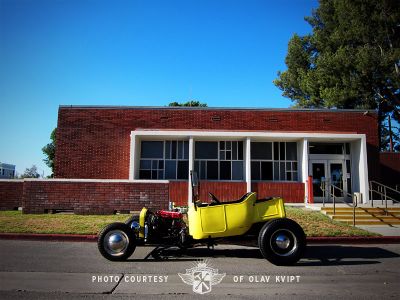 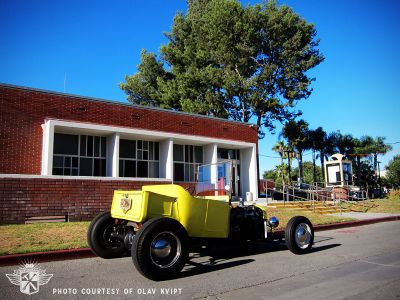 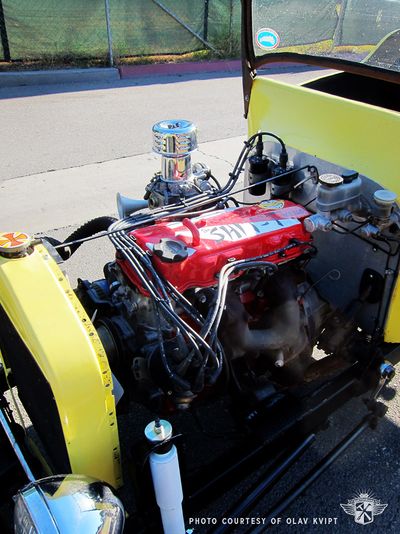 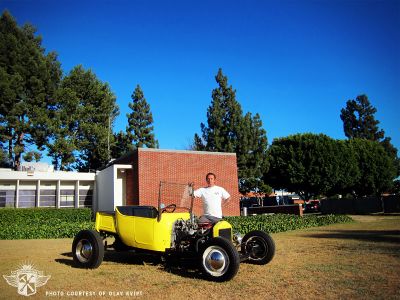 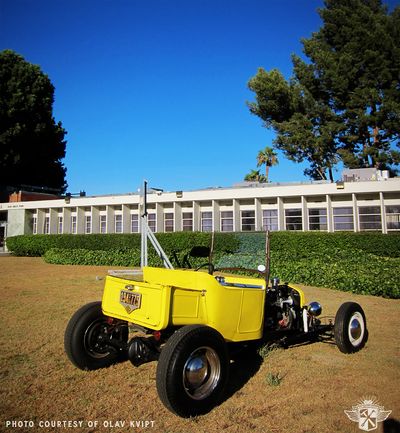 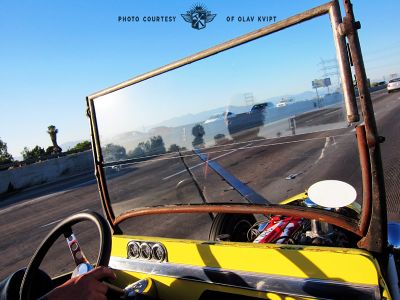 The Shit-T crusing the freeways in California. Photo by Olav Kvipt. 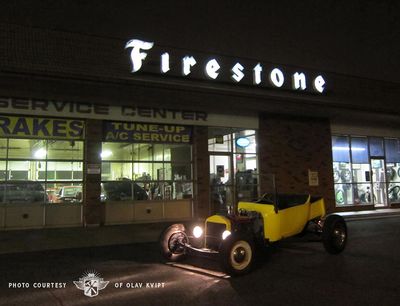 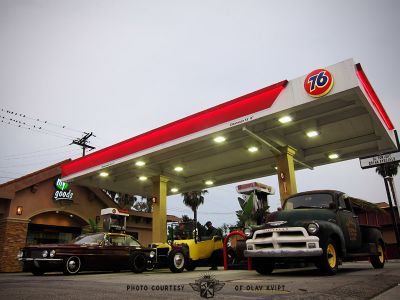 Heading to the 2013 KKOA Leadsled Spectacular in Salina, Kansas. Next to Bucky Crispin's 1960 Oldsmobile and Brad Masterson's 1954 Chevrolet. Photo by Olav Kvipt. 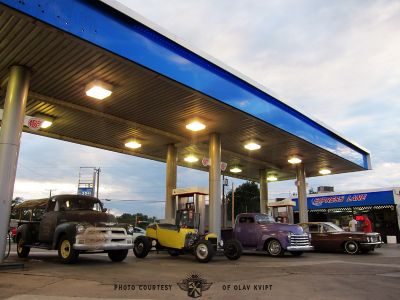 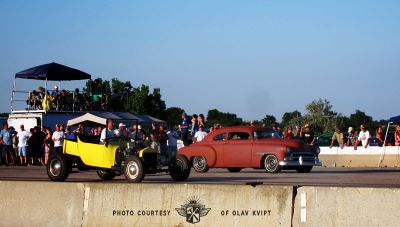 Brad racing with the T-bucket at the 2013 KKOA Leadsled Spectacular in Salina, Kansas. Photo by Olav Kvipt. 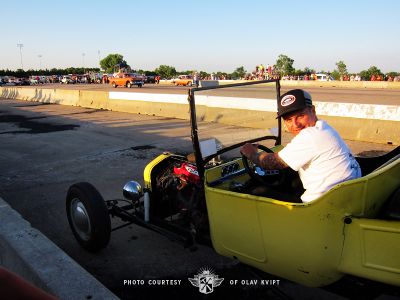 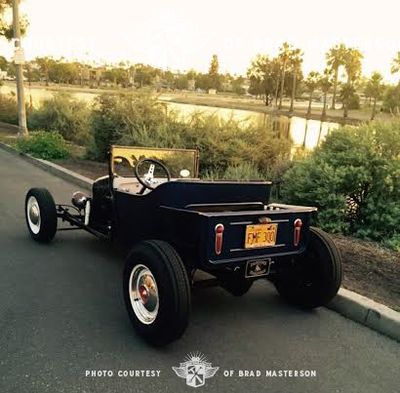 In the summer of 2015, the T was painted dark blue. Photo by Brad Masterson. 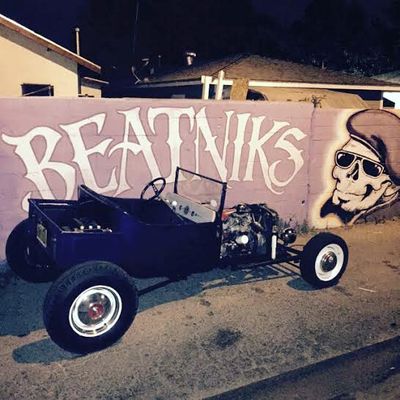 1923 Ford Model T owned and built by Brad Masterson of Masterson Kustoms in Lynwood, California. Brad partly built the car at his grandparents farm in Sacramento. The purpose of the build was to have a reliable daily driver. Brad has a 30 miles drive from his home at Newport, to his shop in Lynwood, so he wanted to build a car that he could use to drive back and forth with, without spending more than necessary on gas. He got hold of a fairly used 1985 Nissan motor home with 3000 miles on the odometer for $1000. He and his buddy Alex SoRelle tore the engine and tranny out of it, a nice 2,4L 4 banger with a 5 speed attached.

An old fiberglass Model T-body was purchased from Von Franco for $200. How old the body is undetermined, however, T-body's were quite popular to fabricate from the late 1950's. The frame is homemade, built on the garage floor in Sacramento, at Brad's grandparents farm. The Nissan mill was painted red, and fitted with a chromed air cleaner. The front axle is a Model A unit, fit with hydraulic brakes. The rear axle was taken from a 1951 Mercury. Masterson installed a set of blackwall tires on white solid 1940's Ford rims up front, while the rear ones are old chromed Ford units . The car has a top speed of 136mph.[1]

The infamous T was repainted red in 2014. The upper windshield was removed, and 1948 Buick taillights were installed in the bed. In 2015, a nicer body was bought and painted dark blue.

Please get in touch with us at mail@kustomrama.com if you have additional information or photos to share about Brad Masterson's 1923 Ford.