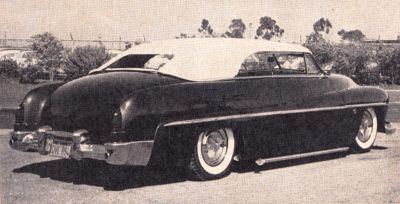 1951 Mercury Convertible restyled by Bailon's Custom Shop in Hayward for Bob and Dick Polhamus of Palo Alto, California. Joe modified the car by chopping the windshield and installing a padded white top. The hood was nosed, the headlights were frenched by using 1954 Mercury rims. The grille was handmade from two 1951 Kaiser bars with custom pointers inserted. The bumpers were stock, however the bumper guards were altered, and the bolts removed. Doors, rear deck, windows, and seats were electrically operated. The rear fenders were reshaped in able to accept a set of 1953 Lincoln taillights. Dual spotlights and lakes pipes wrapped up the style. The exhaust was routed through the bumper to avoid rubbing when driving out of those steep driveways. Once the bodywork was done, it was painted Titian red lacquer. The upholstery was completely redone in red and white Naugahyde to match the exterior. The hubcaps were 1956 Oldsmobile Starfire units, and the engine was from a 1954 Oldsmobile. All the engine components were chromed, and it was fit with a aluminum flywheel, 25 Zephyr gears and four carburetors.[1]

Please get in touch with us at mail@kustomrama.com if you have additional information or photos to share about Bob and Dick Polhamus' 1951 Mercury.