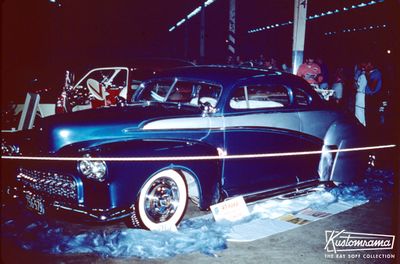 A photo of Bob's coupe taken at an indoor car show. Photo from The Ray Soff Photo Collection. 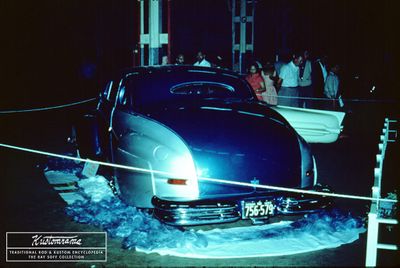 A rear end shot of Bill's coupe from the same show. Photo from The Ray Soff Photo Collection.

1947 Ford Coupe owned by Bob Smith of Chatham, Ontario, Canada. Smith was a rich kid who had the car restyled by Alfred Formosa at the local Chevrolet body shop. The work was done around 1959-1960, and modifications included quad headlights and Jimmy Jones Bubble Skirts.[1]

"The next Smith version was gold and white, like Arctic Sand," Robert Tindale told Sondre Kvipt of Kustomrama in 2019. This iteration featured an extra set of taillights and the trunk lid was welded shut. It was powered by a Y block Ford.[1]

The car sat for years before Bob finally sold it in the 1970s. After he sold it, it was turned into a street rod. Dark green. A high stance. Wide oval tires with white letters and modern wheels. The sidetrim and skirts were removed from this iteration. The bumpers and grille were replaced, and it ran a 302 Ford engine. In 2020 the coupe was still around.[1]

Please get in touch with us at mail@kustomrama.com if you have additional information or photos to share about Bob Smith's 1947 Ford.