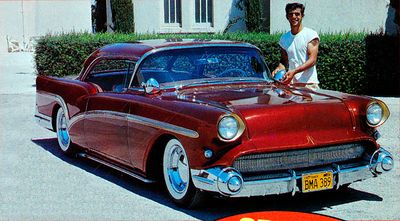 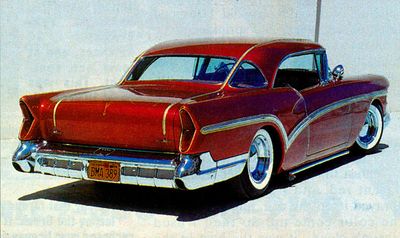 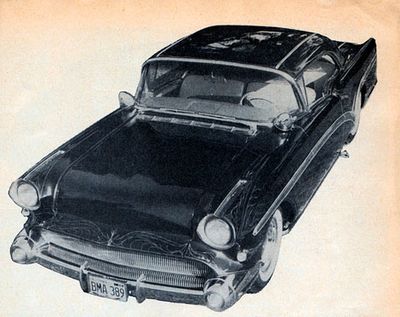 As it appeared after it was pinstriped. 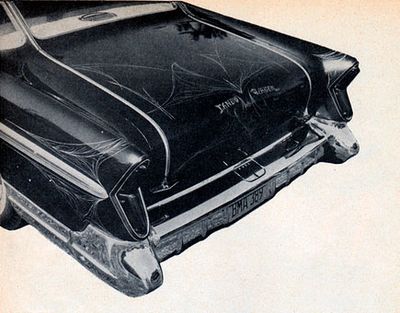 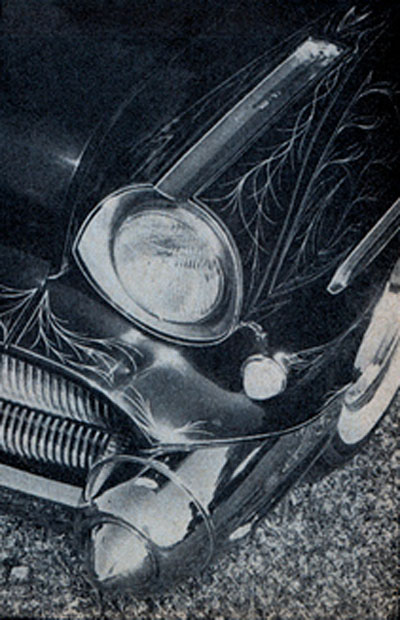 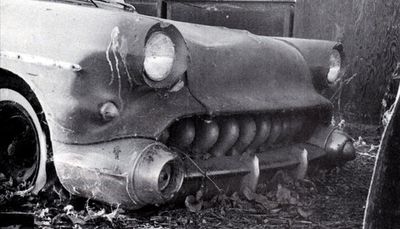 1957 Buick Century Two-door Hardtop restyled by Bailon Custom Shop for Bob Palladino of Antioch, California. Bob bought the car brand new from a local Buick dealer in Antioch. He drove it right over to Joe Bailon to have it customized. Doors and deck lid were shaved and converted to electrically operated. The hood was shaved and extended along with the front fenders, forming a tunneled grille cavity. The Buick grille bar was removed, giving the car a cleaner appearance. The headlights were given a shaded effect by molding sheet metal to the fenders, which were cut in an abstract form. Two 1956 Buick taillight lenses were butted together, making a nicely shaped "V" lens. These were frenched into the fenders, perfectly fitted to blend with the fender lines. Radio antennas were installed horizontally in a concave trough cuts into the top of each front fenders. Once the bodywork was done, it was painted with Bailon's famous Candy Apple Red paint mix, polished to a translucent high gloss which made the car stand out in the crowd. The car was lowered by cutting the coils. Reversed chrome wheels were installed. Dual exhaust plus long drag headers on each sides were used. Dual spotlights wrapped up the style.[1]

By 1959, Bob's Buick featured pinstriping by a local striper that went by the name of "The Mad Striper".[2] The car was shot at the old high school before it burned by none other than George Barris for the motor trend spread it was in. Later it was redone black with Lime Gold fogging with a different interior. The stock grille was replaced with 1951 DeSoto teeth. According to Rod & Custom May 1995 it was redone in Candy Tangerine.

In 1965, the car was parked outside of Bob's ranch in Brentwood, California. It stood parked beneath a drippy tree until it was put into storage in a barn in the mid 1990s. The barn caught fire, and since the car was done with tons of lead, it pretty much melted away, and what was left got sent to the crusher.[3]

Please get in touch with us at mail@kustomrama.com if you have additional information or photos to share about Bob Palladino's 1957 Buick.