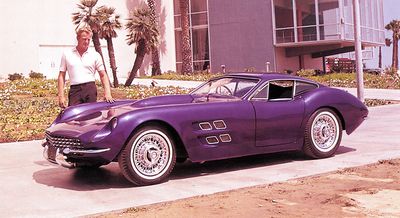 Bob McNulty was a member of the Satan's Angels car club. He was best known for his fiberglass work on Corvettes. However, he bought himself an Astra body that could be put on all sorts of different chassis, including a Corvette. When McNulty customized the Astra, it was a radical departure since he had to build a kit car. Bob chose a Henry J chassis that he had to modify to accept the Astra kit. The suspension and running gear originated from a Thunderbird. The 1957 Ford Thunderbird Y-block 312 cid engine was connected to a Ford three-speed transmission. To add some more power, Bob fit the engine with custom headers, a Mallory ignition and dual four-barrel induction. A new nose was created in fiberglass and the grille was custom made with a 1959 Cadillac grille center. The front was fit with a custom made small split bumper. The rear end was fit with the same sort of bumpers and custom taillights. The small bucket seat frames were retrimmed to match the new black interior. A set of chromed Kelsey-Hayes wheels from a Thunderbird wrapped up the style. Bob painted the car twice, once in Pearl Silver and then in a brilliant purple.[1]

Please get in touch with us at mail@kustomrama.com if you have additional information or photos to share about Bob McNulty's Astra Coupe.