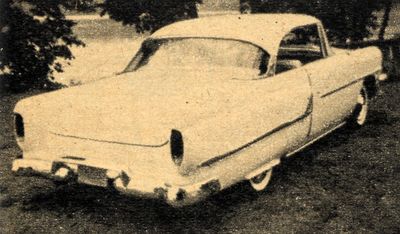 1955 Mercury owned and restyled by Bob Cusic of Washington D.C., Maryland. Bob sent a request to Car Craft Magazine, asking them to show two pictures of his restyled car in their magazine. Bob leaded the hood, trunk and door handles. The doors and trunk were pushbutton operated. He louvered the hood, frenched the headlights and taillights, added a 1957 DeSoto grille/bumper, and a 1955 Pontiac rear bumper. He relocated the gas filler pipe inside the trunk and leaded the gas filler door shut. Airscoops were made in the rear fenders. Custom made fender skirts, full length chrome pipes and 1956 Dodge hubcaps were added. After the car was featured in the March 1959 issue of Car Craft, Bob had planned to work on the engine, which was stock by the time.[1]

Please get in touch with us at mail@kustomrama.com if you have additional information or photos to share about Bob Cusic's 1955 Mercury.