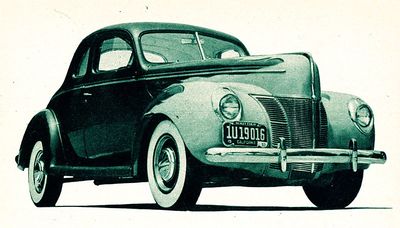 Bob's Ford as it appeared in Rod & Custom February 1954. Photo by Dean Moon. 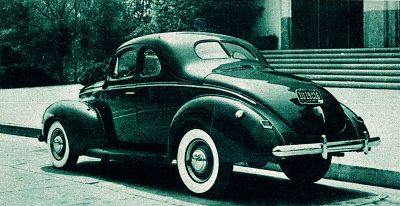 The rear of the car was basically kept stock, except for the larger 7.60-16 tires, and removal of the taillight diagonals. Photo by Dean Moon. 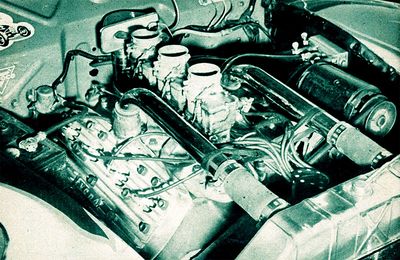 A hot 1946 Mercury mill nestled under the hood. Photo by Dean Moon. 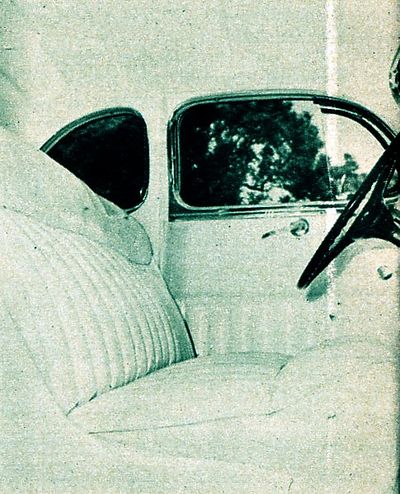 The upholstery was done by John's Auto Top Shop of East Los Angeles. The headliner, door panels and seats were done in pleated and rolled leatherette. All the garnish moldings were chrome plated as well. Photo by Dean Moon. 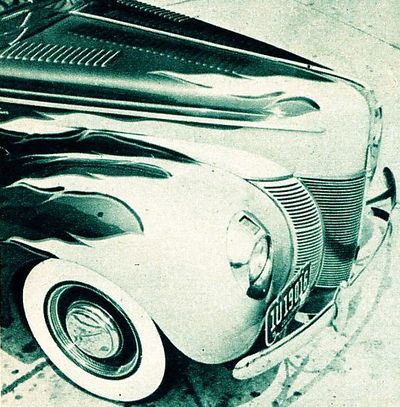 The flame job consisted mainly of orange, with touched of Chinese red and black blending into the maroon. The outer row of louvers were tipped with orange as well. Photo by Dean Moon.

1940 Ford Coupe owned by Bob Brown of Pico, California. When Bob acquired his coupe, it had suffered a gradual decline through the years, and needed a work. Bob rejuvenated the body and chassis and made it appear like new again. The car was mainly kept stock, with deck ornaments, door handles etc, however it was lowered up front by installing a 2 1/2" dropped axle, and mounting 5.60-15 tires. It also featured a wild paint job at the time, which turned lots of heads in Pico, a flame job done in 4 colors! The car was painted a rich metallic maroon lacquer, with the flames done in an orange shade of lacquer blended together with Chinese red and black. The rear tires were 7.60-16, giving it a forward street coupe rake. The trims, bumpers, and bumper brackets were chrome plated. The hood was louvered by Drake Brothers Machine Shop of Maywood. The louvers were punched into the panels for 15 cent per louver.[1]

Not really did the car look good, it ran well as well! With a ported and relieved 1946 Mercury engine, it could really burn rubber. It had been stroked to 4 1/2", and bored out to 3 3/8" giving a total displacement of 303cui. The heads and the three carb manifold were Evans, while the camshaft was a Weber F7 unit. Larger intake valves were installed with heavier springs for higher rpm. The spark was provided by a Scintilla Vertex magneto and a moon ignition. When it was featured in Rod & Custom February 1954, its top time at the quarter mile drags was 96 mph.[1]

The upholstery was done by John's Auto Top Shop of Montebello, East Los Angeles. The headliner, door panels and seats were done in pleated and rolled leatherette. All the garnish moldings were chrome plated as well.[1]

Please get in touch with us at mail@kustomrama.com if you have additional information or photos to share about Bob Brown's 1940 Ford.